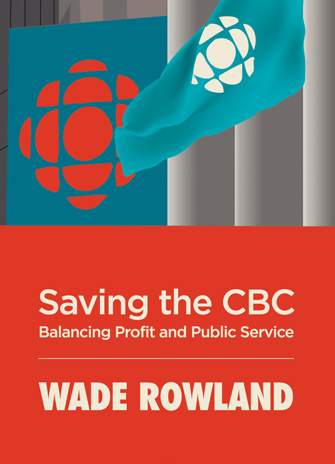 There is less than two years to find a way to save CBC/Radio-Canada, the cornerstone of Canadian culture and an institution many regard as the glue that holds the country together, argues York Professor, veteran broadcast journalist and media

The book will launch Wednesday, March 20, from noon to 3pm, in the Senior Common Room, 140 McLaughlin College, Keele campus, as part of McLaughlin Lunch Talk Series. The launch is sponsored by the McLaughlin College Master’s Office, York University Bookstore and the York Centre for Practical Ethics.

The CBC has faced many crises in the past. Between 1985 and 2010, while total federal government expenditures rose by around 50 per cent, funding for the CBC was slashed by nearly two-thirds. In the decade of the 1990s alone, the corporation lost a third of its public funding and personnel. But today, it is confronting a new crisis – a perfect fiscal storm that could signal the end of public broadcasting as most Canadians know it, says Rowland, a professor in the York and Ryerson Joint Graduate Program in Communication & Culture, Faculty of Graduate Studies.

In 2012, after years of chronic underfunding, the Harper government imposed a $115-million budget cut on the corporation. And now, it faces the imminent loss of broadcast rights for NHL hockey. Hockey Night in Canada, a CBC television mainstay since 1952, provides more than 40 per cent of total advertising revenue and accounts for more than 350 hours of prime-time broadcasting, a Canadian-content chasm that will have to be filled.

CBC management’s solution has been to ask the CRTC for permission to introduce advertising on Radio 2, making it a cash cow for the crippled television service.

It has become clear that if Canada is to retain a public broadcaster worthy of the name, the CBC will have to be radically reformed, and soon. “It is the rapid approach of this moment of truth for the CBC/Radio-Canada and the idea of public broadcasting that has provoked this book,” says Rowland. “It is my contribution to the chorus of voices raising the alarm

and insisting on the preservation of what is widely regarded as the cornerstone of a uniquely Canadian culture.”

In Saving the CBC (Linda Leith Publishing), Rowland draws on more than 40 years of experience in television production, network news management and media scholarship to present a 10-point plan to satisfy the country’s private broadcasting lobby and at the same time rejuvenate the CBC.

Not since the Great Depression, says Rowland, has there been such an opportunity for public service broadcasting in Canada to become all that it can be on all media platforms – and rival the best in the world.

Ranked among Canada’s leading literary journalists, Rowland is the author of more than a dozen non-fiction books, including Spirit of the Web, Galileo’s Mistake, Ockham’s Razor and Greed, Inc.

As a journalist, he has spent many years in television news production at the network level and has held senior management roles at both CTV and CBC, where he was also senior producer of the consumer affairs program “Marketplace”. Rowland was Maclean Hunter Chair of Ethics in Media at Ryerson University from 2001 to 2003.