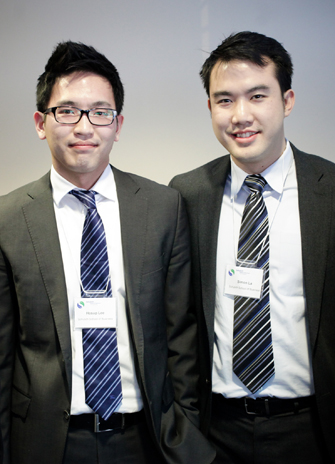 A team of Schulich MBA students delivered the winning solution to a development dilemma at the third-annual invitational Developers’ Den case competition at Schulich School of Business at York University.

The winning Schulich team – Mitchell Ornstein, Simon La, Hosup Lee and Money Khoromi – competed against 11 other teams, including three teams from each of the Graduate School of Architecture, Planning & Preservation, at New York’s Columbia University; the Rotman School of Management at University of Toronto; and the Ted Rogers School of Management at Ryerson University. First and second prize were $3,000 and

“The opportunity to compete against other teams from some of the top real-estate schools in North America and the amount of exposure to industry leaders and recruiters was incredible,” said Lee, MBA ’13. “Developers’ Den was also a great way to meet students from other schools who will become future leaders in the industry.”

Placing second was another Schulich team comprised of Philip Ristevski, Antonio Balesteri, Christian Petersen and Abhinav Bansal. A team from Rotman, one from Ryerson and another Schulich team, were also among the five finalist teams that presented live before a judges’ panel of leading real-estate industry executives.

The March 1 competition, which was organized by Schulich’s Real Estate & Infrastructure Program and sponsored by RealNet Canada, was followed by an awards reception hosted by the Schulich Real Property Students’ Association and an

informal karaoke night to which all contestants were invited.

“Schulich launched Developers’ Den in 2011 to provide our students with another opportunity to learn and grow, with important feedback from industry leaders. The event has generated a lot of buzz within the real estate industry,” said Andre Kuzmicki, executive director of the graduate Real Estate & Infrastructure Program at Schulich. “This year, our students were excited to notice that several recruiters attended to check out the considerable talent from the competing schools.”

Michael Emory, president & CEO, Allied Properties REIT, said he enjoyed participating among the panel of judges for Developers’ Den III.  “The case was challenging, and each of the five finalist teams did an excellent job of identifying and evaluating the possibilities. Selecting the top two teams was surprisingly difficult, as evidenced by the fact that no two judges saw it exactly the same way,” Emory said.

The case was written by Kuzmicki, with assistance from Amber Lam, JD/MBA candidate ’14, and Mark Hao, MBA ’09 and leasing manager, Oxford Properties Group.

Students were asked to present the best approach to a fictional North Toronto twin tower commercial project, which included a vacant land parcel owned by a large institutional investor. The conundrum: whether to develop the vacant parcel, a decision resting in part on another decision, or whether to hold or sell the entire project. The competitors had to consider the investors’ objectives and strategy, current and future space and investment market conditions, the competitive strengths and weaknesses of the project, the synergistic benefits of developing a third building on the site and the economics of the proposed development.

The winning team was the only team among the finalists to support standing firm with the status quo, which made them a bit nervous, said Khoromi, a student in the JD/MBA program.