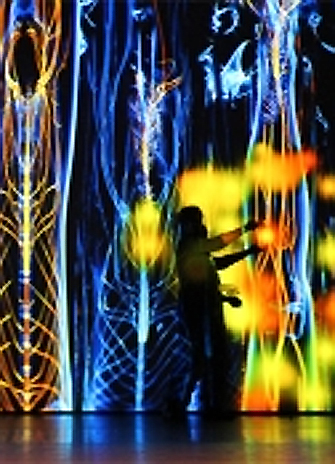 Theatre and digital media students are coming together in a dream team to conjure Puck and Oberon’s bewitching fairyland for Theatre@York’s March production of Shakespeare’s A Midsummer Night’s Dream.

Using motion capture technology with a variety of sensors, the performers in the show will be able to control projections of complex digital animations in real time. A wave of an infrared wand can create twinkling fairy lights or control swarms of shadows, while the movements and expressions of an actor

wearing a head-mounted camera will cause a floating, 3D-animated virtual donkey head to follow suit.

“Shakespeare wrote a romantic fantasy full of supernatural illusion and magic,” said Theatre MFA candidate Alison Humphrey, who directs the show. “We’re using the kind of digital special effects normally used in blockbuster movies to bring his fairy magic to life on stage. And since everything happens in real time, driven by the actors, the projected images will breathe, dance and change with each performance.”

Humphrey’s fascination with live performance technology manifests itself in a company called Lucid Dreaming LiveFX that she is launching with creative producer Vanessa Shaver. The two met at the Sheridan College Screen Industries Research and Training (SIRT) Centre’s motion capture and previsualization conference in 2011. There, they planted the seeds that are coming to fruition in Theatre @ York’s Dream, which is Humphrey’s thesis production. Shaver was invited to join the show as a visiting artist, working with the digital media team and coordinating external collaborators.

“Arthur C. Clarke famously quipped that ‘any sufficiently advanced technology is indistinguishable from magic’, and this concept forms the backbone of our production,” said Humphrey.  “Entertainment giants like Pixar and Cirque du Soleil revolutionized storytelling by mixing new technologies into animation and circus arts respectively, gripping audiences with a sense of wonder.”

The Dream team aims to break new ground in visual storytelling by inventing new technologies as well as pioneering ways to combine existing techniques for dazzling effects on stage. York’s talented theatre production students have been working from the start with their counterparts in the Digital Media Program, weaving cutting-edge and time-honoured stage techniques together to create innovations in set, costume, lighting, projection and sound design.

The technology integrated into the show is drawn from a tool box partly sourced within York – such as an existing prototype of the fairies’ infrared wands and digital media students’ proficiency in a variety of creative coding programming environments (aren’t some of the projectors ours? The catalyst server?) – and partly

Integrating costumes and technology is all part of the fun. Rhys Mendes (right) fits an infrared light strip to student Shianney Zaelani’s fedora

Some of the fairy-magic code the digital media team is working with was adapted from the open-source community at OpenProcessing.org. Companies such as Toronto-based GestureTek and Dynamixyz of Rennes, France, have lent motion-capture gear and expertise. Videogame star and convergence consultant Pascal Langlois (Motives in Movement) has been working with Adam Bergquist, a member of the Graduate Acting Conservatory in York’s MFA Program in Theatre, to get the most out of the show’s virtual donkey head for the role of Bottom, the rustic. A satellite team of animators and programmers from the SIRT Centre is also helping to bring the donkey head to life.

“There’s just a small number of companies innovating with this technology, and we’ve been very lucky to attract some of the best in the world,” said Shaver. “There’s a real sense of excitement and support for what we’re doing, which in many respects breaks fresh ground in motion capture and live performance.”

“The students working on A Midsummer Night’s Dream are gaining valuable hands-on experience working collaboratively and applying their creativity on the large-scale, technologically sophisticated stage of the Sandra Faire and Ivan Fecan Theatre [in York’s Accolade East Building],” said Professor Don Sinclair, coordinator of the Digital Media Program in the Faculty of Fine Arts. “Balancing the desire to create very complex, wondrous effects with the need to have things to work flawlessly during a performance poses an exciting challenge. Ultimately, it’ll be a real thrill to stand on stage in front of a big screen waving a wand and seeing your interactive effects come to life.”

York’s Digital Media Program, launched in 2008, is an innovative, interdisciplinary and cross-Faculty program bringing together the strengths of the Faculty of Fine Arts and the Department of Computer Science in the Lassonde School of Engineering. Students use computer code to explore theoretical, artistic, aesthetic and experiential ideas and techniques, gaining comprehensive skills for the creation of interactive mobile and desktop apps, immersive environments, physical objects and interactive electronics.

“This collaboration is a total blast,” said Humphrey. “York’s theatre team is incredibly talented in its own right, but when we joined forces with the digital media students it was kind of like hiring a crew of magic wizard-fairies for real!”