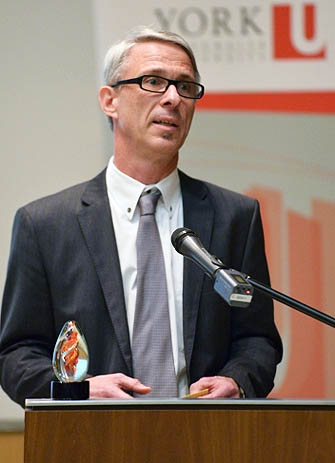 Professor Roger Keil of the Faculty of Environmental Studies has been named the 2013 President’s Research Excellence Award recipient. Keil was accorded the honour in recognition of his significant contributions to York University’s research community.

“I am deeply honoured to receive this prestigious award. I have been extremely fortunate to work on many research projects with faculty, staff and students at York University who have provided inspiration and support for the work that is being celebrated here,” says Keil, who is also the director of the City Institute at York University (CITY).

“I am thrilled that Roger was named the recipient of this award,” says Mamdouh Shoukri, president & vice-chancellor. “Roger is a highly respected researcher and mentor, and one of many of our leaders here at York making great strides in issues of global importance.”

The Senate Committee on Awards selected Keil from the nine nominations for this year’s award — a $10,000 internal research grant — for his many achievements as an internationally renowned scholar who has shaped the interdisciplinary study of global urbanism.

Keil, who leads the $2.5-million Major Collaborative Research Initiative (MCRI), Global Suburbanisms: Governance, Land and Infrastructure in the 21st Century, has published 11 books and more than 150 articles, and was the editor of the International Journal of Urban and Regional Research, a premier journal in his field. He has also been a visiting scholar and professor at a number of international institutions.