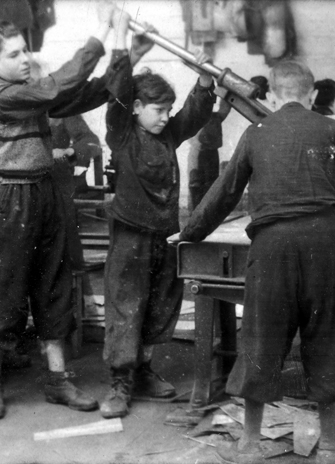 The Israel and Golda Koschitzky Centre for Jewish Studies and Osgoode Hall Law School at York University are hosting the only exhibition in Canada of photographs taken by Jewish photographers in the Lodz Ghetto between 1940 and 1944.

The Face of the Ghetto: Pictures by Jewish Photographers from the Lodz Ghetto, 1940-1944, which features approximately 50 large-scale photographs, will be on display until Sunday, March 17, in the library of Osgoode Hall Law School, Keele Street.  Hours are Monday to Thursday, 8am to 10pm; Friday, 8am to 5pm; and Saturday to Sunday, 10am to 6pm.

A series of free public lectures, films and panel discussions on issues related to Lodz, the Holocaust more broadly, as well as photography and art as a vehicle for testimony and resistance, are planned in conjunction with the exhibition. Lodz was the occupied Polish city where the Nazis established the second largest ghetto for Jews during the Second World War, and where tens of thousands of people died as a result of abominable conditions and a deliberate policy of genocide.

The opening lecture of the exhibition will be given on Sunday, March 3 at 4pm in the Moot Court Room at Osgoode Hall Law School by Jan. T. Gross, a professor of history at Princeton University and author of several books, including Neighbors, Fear, Anti-Semitism in Poland after Auschwitz. His talk is titled “On the Periphery of the Holocaust – Pillage and Killings of Jews by Their Neighbors.”

Sara R. Horowitz, director of the Israel and Golda Koschitzky Centre for Jewish Studies, which was instrumental in bringing the exhibition to York University, says The Face of the Ghetto is drawn from the nearly 12,000 contact prints currently held in the Lodz state archive and includes excerpts from the Chronicle of the Lodz Ghetto and statements by former Ghetto residents.

The Jews in the Lodz Ghetto were prohibited from possessing cameras, Horowitz explains. However, a small number of Jewish photographers were given cameras and commissioned to document the efficiency of the Ghetto factories and other sites of slave labour. At their own initiative and at personal risk, the photographers took thousands of photographs of Jewish life in the Ghetto.

Above: The exhibit features 50 large-scale, riveting images that were taken by Jewish photographers who shared the fate of the people they photographed. Each of the images reflects the terrible conditions endured by people in the Lodz Ghetto.

“Unlike photographs taken by Nazi photographers, the photographs in this exhibition were taken by photographers who shared the fate of the people they photographed,” Horowitz says. “The photographs reflect a deep empathy, and a sense of the efforts of the Ghetto inhabitants to maintain their dignity and culture in face of an unspeakably harsh and increasingly helpless situation.”

The exhibition in Toronto is sponsored by the Israel and Golda Koschitzky Centre for Jewish Studies at York University; The Azrieli Foundation; and The Mark and Gail Appel Program in Holocaust and Antiracism Education – Learning from the Past, Teaching for the Future; and is hosted by Osgoode Hall Law School. The exhibition is curated and provided by the Topography of Terror Foundation (Stiftung Topgraphie des Terrors), Berlin and is supported by the Foreign Office of the Federal Republic of Germany.

The Face of the Ghetto was first shown in North America at the United Nations in New York City from January to March 2012 and then toured to several other American venues. The Toronto exhibition is its only showing in Canada.

For further information about the exhibition, contact the Israel and Golda Koschitzky Centre for Jewish Studies at cjs@yorku.ca or 416-736-5823.