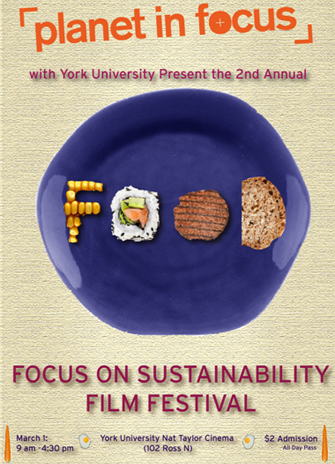 The upcoming annual Focus on Sustainability Film Festival will feature domestic and foreign documentaries, as well as a panel discussion with filmmakers, foodies and academics.

The event will take place Friday, March 1, from 9am to 4:30pm, in the Nat Taylor Cinema, 102 North Ross Building, Keele campus. The cost of admission is $2 for all-day access. It is presented by Planet in Focus and York University.

Several films will be shown, followed by a panel discussion at 1:30pm and the final film at 3pm.

The panel will include:

The films will include:

Bitter Seeds at 9am
Every 30 minutes a farmer in India kills himself in despair because he can no longer provide for his family. Will Ramkrishna be next? A cotton farmer at the epicentre of the suicide crisis region, he is struggling to keep his land. Manjusha, the neighbours’ daughter, is determined to overcome village traditions and become a journalist. Ramkrishna’s plight is her first assignment. Bitter Seeds raises critical questions about the human cost of genetically modified agriculture within a gripping character-based narrative. This is the final film in the Globalization Trilogy, following the award-winning Store Wars and China Blue.

LoveMEATender at 10:50am
It is billed as a documentary about the world of meat as it has never been seen before. It questions the place of meat in the lives of human and the crazy surge that made it a product like any other, subject to the rule of the lowest possible price. In 2050, there will be around nine billion individuals on Earth and to supply everyone with meat will require 36 billion head of livestock. Is it reasonable to continue to think that every person can eat meat every day?

Urban Roots at 12:10pm
Urban Roots is the next documentary from Tree Media. Produced by Leila Conners (The 11th Hour) and Mathew Schmid and directed by Mark MacInnis, the film follows the urban farming phenomenon in Detroit. Urban Roots is a timely, moving and inspiring film that speaks to a nation grappling with collapsed industrial towns and the need to forge a sustainable and prosperous future.

Sushi: The Global Catch at 3pm
Sushi: The Global Catch received the Special Jury Award at the 2011 Seattle International Film Festival. This feature-length documentary asks the question: How did sushi become a global cuisine? What began as a simple but elegant food sold by Tokyo street vendors has become a worldwide phenomenon in the past 30 years. The film is shot in five nations that explores the tradition, growth and future of this popular cuisine. Beautiful raw pieces of fish and rice now appear from Warsaw and New York to football games in Texas towns. Can this growth continue without consequence?

There will also be door prizes, including:

The film festival is sponsored by York’s Centre for Human Rights and Food Services. It is organized by the Osgoode Environmental Law Society, the Institute for Research & Innovation in Sustainability (IRIS) and the Climate Consortium for Research Action Integration.

For more information, visit the Institute for Research & Innovation in Sustainability website or the Osgoode Environmental Law Society website.