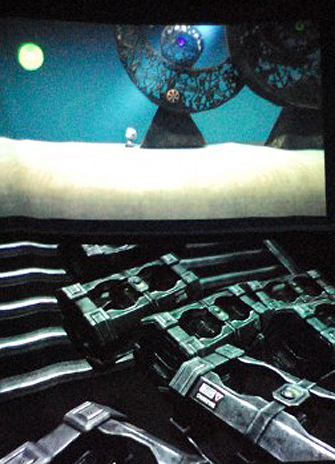 York graduate students Skot Deeming and Clint Enns are out to shake up Toronto’s game and contemporary art communities with a five day festival dedicated to the intersection of the two worlds.

Vector includes exhibitions, screenings, workshops, performances and round table discussions, all aimed at creating a critical dialogue about the medium of games and its expressive potential in contemporary art practice.

“There’s a growing awareness that video games are an art form,” said Enns, who is pursuing a master’s degree in cinema and media studies. “New York’s Museum of Modern Art recently added video games to its collection. And the Smithsonian American Art Museum in Washington presented an exhibition called The Art of Video Games for six months last year. That show is now touring to 10 other American cities.”

Deeming and Enns note that Vector builds on the foundation of festivals such as Gamerz in Aix-en-Provence, France and two American conferences, Babycastles Summit in New York City and IndieCade, which started in Los Angeles but has expanded into New York City as well.

In 2006, York hosted a related workshop for the Canadian Game Studies Association (CGSA), coordinated by Professor Jennifer Jenson of the Faculty of Education. Dedicated to the interdisciplinary study of digital games, the CGSA workshop included demonstrations of new games and games in progress with topics ranging from the spread of the avian bird flu to the humanitarian toll of the Bejing Olympics, plus explorations of national research initiatives.

“As the game development capital of Canada, Toronto needs to be part of this dialogue,” said Deeming, who is studying in the York/Ryerson Joint Graduate Program in Communication & Culture. “As academics, Clint and I are particularly focused on getting gamers and art enthusiasts to engage in a critical discourse on game art. If we can help break down the perceptual resistance to video games as an art form, this would raise the bar for developers, which in turn would result in a better gamer experience all around.”

Vector performance highlights include Halo Ballet, a choreographed dance performed ‘live’ by avatars to live music by Toronto’s groundbreaking ensemble Toca Loca, and Brooklyn’s Foci+Loci, who create live electro-acoustic sound pieces using custom game levels built in Sony’s LittleBigPlanet. Workshops include micro.twine.jam, a tutorial on designing your own short video game using Twine software originally intended for kindergarteners, and the boardgame.remix.jam where participants are given various items from classic board games to create their own new games.

Vector also plays host to three art exhibitions that address a wide range of creative practices within game art; five film and video screenings, including the Canadian premiere of iconic game developer Bill Viola’s latest creation; and three panel discussions on issues of play, appropriation and gender with artists and scholars working in the medium.

In addition to these programs, Team Vector has partnered with Toronto’s feminist collective Dames Making Games to present their February Speaker’s social and Feb-Fatale arcade, which will include digital games created during a weekend-long, intensive game-making workshop.

Admission to the opening reception and all Vector exhibitions and panel discussions is free of charge. Tickets for screenings, workshops and performances may be purchased individually ($5-$10) or in bundles. For more information including a detailed schedule and online tickets sales, visit www.vectorgameartfest.tumblr.com.

Attendees are invited to tweet about Vector using hashtag #vector2013 or tag @vectorgameart.