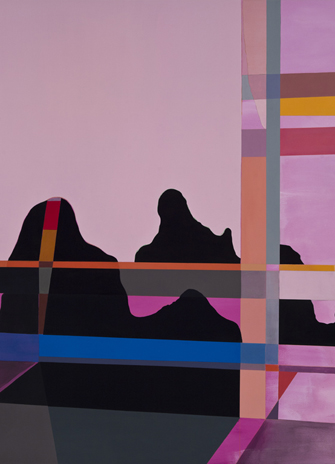 Faculty members in the studio program in the Department of Visual Art & Art History are showing their work at a number of public and private galleries this season.

capacity. Through her word-based sculpture in neon, digital displays and projections, Singer suggests new meanings for the language of everyday. She explores and questions ideas of interpretation, miscommunication and ownership of language. jst wrds opened Jan. 19 and runs to Feb. 24 at Cambridge Galleries, Queen’s Square in Cambridge, Ontario.

Usher the Fall of the House, a major new sculptural work and a video collaboration by Professor Kevin Yates, is currently on view at Rodman Hall Art Centre at Brock University, St. Catharines. Yates is known for his highly realistic miniatures that are at once familiar and strangely unsettling. Exuding a quiet, meditative quality, his works are dream-like in their subversion of the expected. With Usher the Fall of the House, Yates advances his consideration of the uncanny, exploring domestic spaces as sites of memory, mystery, wonder and fantasy. The show, which opened Jan. 19, runs to June 16.

With his longstanding artistic interest in fraternity and violence, York alumnus and contract faculty member Scott Waters (MFA ’04) was a natural candidate for the federal government’s Canadian Forces Artists Program, which gives Canadian artists the opportunity to record Canada’s soldiers in action at home and around the world.  Waters developed his solo show RotoZero in response to the time he spent with the Third Battalion of the Princess Patricia’s Canadian Light Infantry during their training and then deployment to Kabul for Canada’s post-combat training mission in Afghanistan.

Less a document of a mission than a consideration of how we recall and construct stories, RotoZero Incorporates painting, photography, text panels and found objects as proxy for the narrative drive, based on the anticipation, boredom, frustration and terror that were markers of the training mission to Afghanistan.  The exhibition is on view at Toronto’s YYZ gallery to March 30.

Professor Nina Levitt is one of eight artists featured in Rare & Raw, an exhibition opening Feb. 15 at the Leslie-Lohman

Levitt’s contribution to the exhibition centres on a collection of archival images of the legendary 19th century American frontier scout and fighter known as Calamity Jane. The artist draws attention to Calamity Jane’s gender ambivalence and ‘butch’ characteristics in these historic images. Levitt will participate in a panel discussion about the work on Feb. 16. Rare & Raw will be on display until March 31.

Intermedia artist and composer, Professor Marc Couroux co-leads Running with Concepts: The Sonic Edition, an event taking place at University of Toronto Mississauga’s Blackwood Gallery Feb. 23-24. Workshop, conference, crit session, master class and pechakuka rolled into one, this hybrid event explores how ideas take form. The focus is on sound, both in itself and also in dialogue with image, text and performance.

Couroux will join Toronto-based artist, teacher and York graduate Marla Hlady (MFA ’90) and Berlin-based artist, writer and educator Brandon LaBelle in modeling the process by which each artist moves from the conceptual to the ­final stages of a project. His presentation, Towards Indisposition, explores how sound and its relationship to the political and the social provides a front according to which action can be envisioned.

Later this spring Montreal’s Galerie Trois Points will showcase a solo exhibition of paintings by Professor Michel Daigneault. Daigneault’s large canvases reveal new pictorial possibilities within abstraction. While his works are non-figurative, they constantly play with the concept, colours, forms and space of figuration. Michel Daigneault: Recent Paintings opens with a reception on April 6 and runs to May 18.

Professor Janet Jones’ solo show DaDa Delirium concludes a four-year tour with an engagement May 16 to July 11 in London, Ontario at Western University’s McIntosh Gallery. After its debut at the Tom Thomson Art Gallery in Owen Sound (See YFile, March 13 2009), the exhibition made stops at the MacLaren Art Centre in Barrie and the Art Gallery of Northumberland in Coburg, Ontario. The show, curated by York alumnus Stuart Reid (BFA ‘86), comprises 14 monumental paintings and a dozen smaller works exploring the futuristic or “techno sublime” elements of major cities. A companion catalogue co-produced by the host galleries contains essays on Jones’ work by Reid and York visual arts Professor Nell Tenhaaf, and an interview with the artist by alumna Georgiana Uhlyarik (MA ’98), assistant curator of Canadian art at the Art Gallery of Ontario.