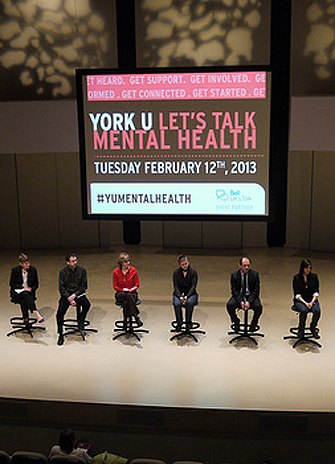 What does a mentally healthy University campus look like? That is the question that started the York U Let’s Talk Mental Health community dialogue event Tuesday.

The answers will help develop a mental health strategy for students, faculty and staff at York University.

“In any given year, one in five Canadians will experience a diagnosable mental health problem or illness, with students being the most at- risk,” said President & Vice-Chancellor Mamdouh Shoukri. “With such startling statistics, we recognized how important it was for York to create a mentally healthy environment for our entire community.”

“Identifying and assisting our community members in need is not only a fundamental responsibility, but key to our University’s mission,” said Moderator Lesley Beagrie, associate dean of the Faculty of Health and co-chair of York’s Mental Health Action Group. “Our student population falls into the highest risk age group for mentally illnesses and substance dependencies, and 64 per cent of York students say they find academic work traumatic or very stressful.”

Following a video message from six-time Olympic medallist and York honorary doctorate Clara Hughes, six panellists gave their visions of a mentally healthy campus interspersed with comments and questions from the audience in the Tribute Community Recital Hall and through tweets and facebook.

Sankreacha was the first to address the question, saying, “One thing I’ve learned about health is that mental health is not something you see, but something you feel. She said York should feel like home, one where “you feel comfortable and supported, where roles are clear and students know where to go to if they have a problem. Where every single student can feel like part of the family too and not excluded.”

Fullick, whose studies focus on university governance, post-secondary policy and organizational change, said “every policy affects mental health at the University. I think policies have a lot of assumptions embedded into them.” Another area of concern, she said was students feeling isolated.

As the forum got rolling, the theme of isolation was raised time and again with calls for peer mentoring to continue on past first year. “While the focus can be when we talk about mental health well-being on the individual, it’s really all about their context, their social context around them, their families, their neighbourhoods, their schools, their workplaces…It’s about all of those interconnections and that’s why we do need to have a discussion about what a mentally healthy campus looks like,” said Khanlou. “I’ve done a number

of community-based studies with teens and young adults and what comes out in talking with young folks is what positive mental is it’s all about feeling good about ourselves, feeling included, feeling that we belong and that we’re connected to others, and finding meaning in what we do, and, most importantly, having a sense of hope.”

Eastwood also spoke to belonging as imortant. “We know that social belonging is a fundamental human need, and we know that social isolation, alienation, low social status, a lack of social support are all associated with poor well-being. We also know it’s the subjective experience of belonging or not belonging that seems to be as important if not more important that any objective indicator of connection. It is how we feel.”

He told the audience about an experiment conducted on a volunteer group of first-year students designed to increase student sense of belonging and help them understand that the typical adversity a first-year student might encounter is common, is shared, and in many cases is temporary. Three years later, the researchers compared those students to a control group and “found those students had higher grade point averages, had greater emotional and had greater physical well-being,” said Eastwood. It was a simple, small experimental manipulation in a lab, not policy-wide, but it made a huge impact in social belonging. The results were published in the journal Science in 2011.

Morrison emphasized the importance of how the issue of mental health is approached. There is a ton of literature on engagement, she said. “We know that students that are engaged persist in a more fulsome way and they tend to be more satisfied. We know that staff who are engaged tend to stay longer, they tend to perform better on outcomes.” But speaking to culture, Morrison said, people here are not always kind to each other. That needs to be built in so people feel safe in asking for help and so that trust can be fostered.

Several grad students also spoke to the need for a culture shift so that students would feel safe and supported in voicing their mental health issues. But they also pointed to financial stress as adversely affecting student mental health and the need not only for more financial support of students. To those grad students, a less competitive and more supportive culture, along with better financial resources is what a mentally healthy campus would look like to them.

Saavedra spoke to a different aspect of the issue – the physical environment and how colour, way finding, materials, textures, and sounds all contribute to the quality of the environment. These design metrics have contributed, he said, to a much healthier environment, and to a healthier mind and body.

What does a mentally healthy University campus look like to you? The question that is still open for students, staff and faculty to answer. To do so, send tweets to #yumentalhealth or visit the Mental Health at York website – Yorku.ca/mentalhealth.