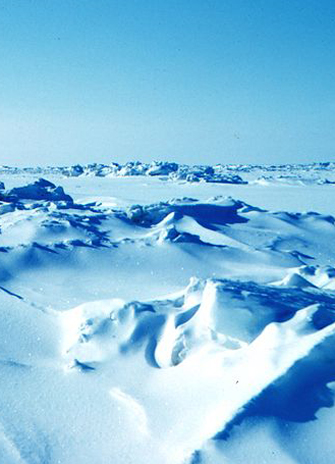 The study, “CryoSat-2 estimates of Arctic sea ice thickness and volume”, published in the journal Geophysical Research Letters, examined data gathered by the European Space Agency’s CryoSat-2 satellite from 2010 to 2012, comparing it to data taken from NASA’s ICESat satellite from 2003 to 2008. Results show an extensive sea ice thinning in the Arctic between 2003 and 2012, with 36 per cent loss of ice volume in autumn and nine per cent loss in winter.

“Data are urgently required to better understand the causes of Arctic Ocean change and to better predict the ice’s future fate,” says York professor and study co-author Christian Haas, Canada Research Chair for Arctic Sea Ice Geophysics and coordinator of international CryoSat sea ice validation activities. “While two years of CryoSat-2 data aren’t indicative of a long-term change, they are to be seen in the context of ongoing international efforts to observe sea ice thickness and volume from space.”

The study reveals that thick sea ice has disappeared from a region to the north of Greenland, the Canadian Archipelago and to the northeast of Svalbard. It confirms the continuing decline in Arctic sea-ice volume simulated by the Pan-Arctic Ice-Ocean Modelling and Assimilation System (PIOMAS), which estimates the volume of Arctic sea ice and has been checked using earlier submarine, mooring and satellite observations.

The CryoSat-2 satellite measures ice volume using a high-resolution synthetic aperture radar altimeter, which fires pulses of microwave energy down towards the ice. The energy bounces off both the top of sections of ice and the water in the cracks in between. The difference in height between these two surfaces lets scientists calculate the volume of the ice cover. These delicate measurements need to be carefully validated to remove any potential biases. The team confirmed the accuracy of CryoSat-2 estimates using measurements from three independent sources – moored upward-looking sonar, airborne laser altimetry and airborne electromagnetic thickness sounding.

Haas’s Sea Ice Geophysics Team at York University is one of only a few groups worldwide capable of performing airborne electromagnetic ice thickness surveys. In April 2011 and 2012, his group provided data from the region between Canada and the North Pole during two dedicated airborne surveying campaigns.

“Canada has the last regions of the world’s thick multi-year ice, and can provide ideal logistics in support of these measurements. Our activities were part of our efforts at York University to establish an airborne Canadian Arctic Environmental Observatory to provide baseline climate data, validation of satellite missions and ice information in support of shipping and offshore operations in ice-covered waters,” says Haas.

The findings are the result of an international collaboration between teams from University College London, the European Space Agency, the Jet Propulsion Laboratory, the University of Washington, York University, Alfred Wegener Institute for Polar and Marine Research, Woods Hole Oceanographic Institution, Morgan State University and the University of Maryland.

Haas’ research was funded by the Natural Sciences & Engineering Research Council, the Alberta Ingenuity Fund and the European Space Agency.