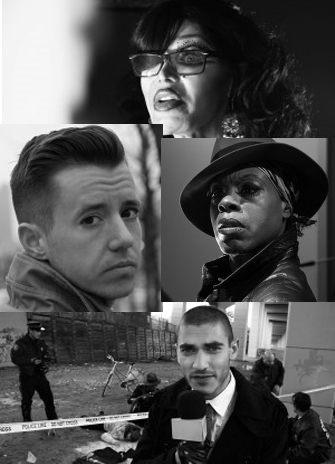 Many Torontonians are finding their daily commute a lot more fun these days. Enlivening their trips on public transit is Murder in Passing, a trans-media “whodunit” written and directed by York University film Professor John Greyson. The riveting serial narrative, which launched on Jan. 7, runs to March 1, playing out on TTC subway screens and online.

Shot and edited film noir-style in moody black and white, the story unfolds in 42 silent, 30-second episodes. A new chapter is broadcast daily, Monday to Friday, on around 300 subway platform television screens. Episodes are repeated every 10 minutes and on weekends.

Viewers can also follow the tale on the Murder in Passing website, YouTube and Facebook. Online, each episode comes with a music video coda: a mock-opera soprano aria, created by Toronto composer David Wall and sung by actor Bardua, that offers a hint to help solve the case. Clues can also be found on the series’ blog, on Twitter and in the daily commuter newspaper Metro.

“Murder mysteries have always engaged social issues – think of Ruth Rendell, even Agatha Christie,” said Greyson. “I’m excited to be working in this genre and using it to explore complex gender and environmental issues.”

While the plot line is invented, Greyson drew inspiration for Murder in Passing from real-life events and contemporary news reports. “The script evolved from a wide range of sources, especially news stories about cyclists, lesbians, gays and trans people killed in various cities over the past decade,” he said. “It evolved into a larger meditation about the opportunism of green washing and the politics of gender.”

Looking for the murderer is the bike-riding Detective Epicene (Alexander Chapman), who is a transgender woman

Murder in Passing caught the attention of the media right from the start. Greyson discussed the project’s origins, the larger social issues it addresses, and multi-platform storytelling in a CBC interview shortly before the launch. At the serial’s debut, New York City-based Filmmaker Magazine highlighted its innovative use of interdisciplinary, interactive and cross-media to engage viewers, and the Toronto Star hailed the project for taking “a fresh look at what it means to make art for a public space”. “Murder in Passing’s lensing of trans issues feels like a necessary social intervention,” said NOW magazine in a feature story Jan. 23.

Murder in Passing was commissioned for the TTC screens by Art4 Commuters and Pattison Onestop. The project is also a SSHRC-supported case study advancing Greyson’s work within the Future Cinema Lab, a research collective based in York’s Faculty of Fine Arts that looks at how new digital storytelling techniques are transforming a diverse array of state-of-the-art screens. Greyson co-founded the lab with his film department colleague, Canada Research Chair Janine Marchessault, who is a co-investigator on the SSHRC project.

Greyson and Marchessault’s study will analyze the reception of Murder in Passing within the hectic environment of Toronto’s 60 subway platforms and a potential audience of more than one million riders daily. Reception will be qualitatively measured via a variety of online and social media avenues and in-person interviews. While many mass transit art projects have included short films, to date there has been little exploration of the possibility of running a sustained series on an urban screen network – making this a groundbreaking public art project in a global context.

A suspect in the murder of the bike courier is Erin Bardua, a chemistry professor played by York theatre graduate Nina Arsenault (BA ’96, MFA ’00)

Greyson and Marchessault plan to disseminate their findings at upcoming conferences including the Creative City Summit in Ottawa (May 29-31), where Marchessault will give a keynote presentation. And Murder in Passing will engage a whole new audience in the next few months, as Art4Commuters and Pattison Onestop will be rolling it out to commuters on Edmonton’s light rail transit. The series’ website will also remain available as a comprehensive study resource for scholars, artists engaged in similar projects, other urban screen networks and the general public.