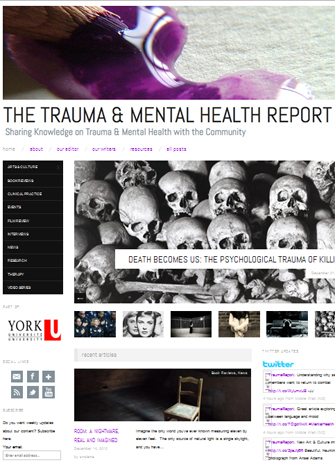 Films and television shows have long been fascinated with portraying mental illness – think of the 1957 movie The Three Faces of Eve or the current TV show “The Big Bang Theory” – but do they get it right? That is just one of the topics tackled in the re-launched The Trauma & Mental Health Report, a weekly online magazine published out of York University.

“The main impetus for the magazine is to provide accurate information

on mental health, and to help break down the barriers of stigma those with a mental illness often face,” says York Psychology Professor Robert Muller of the Faculty of Health and author of Trauma and the Avoidant Client: Attachment-Based Strategies for Healing.

The Trauma & Mental Health Report, designed to disseminate knowledge on interpersonal trauma and mental health, has expanded its coverage from trauma to include the whole of mental health. That includes articles, such as “The Media and Dissociative Identity Disorder”, which looks at how mental illness is popularly portrayed in various forms of media.

“The article is an interesting, fun and compelling read,” says Muller. But the reason for tackling these types of issues is to “set the

record straight” and provide the general public with accurate knowledge and insight. “I think there is a big need for it. There are so many misconceptions that won’t die.”

The magazine, says Muller, explores some of the most pressing and current issues around mental health and mental illness. It does so not only through news articles, but through book and film reviews, arts & culture, a probing look at new research and videos. “And, the coverage is global in nature, it’s not just local issues,” says Muller. “In this way, we hope it will have a much wider appeal. It’s meant to be broad – not only what research shows, but what clinicians have to say on the matter.” Already, there are people in the United States, Australia and New Zealand reading it.

One of the most recent articles, “Toughing it Out: Posttraumatic Stress in Police Officers”, takes a hard look at the catch-22 that police officers face, including losing their badge and their gun after coming forward with a possible mental illness or not reporting it and having symptoms increase. Another delves into the mind of a stalker, while another makes attempts at demystifying hypnotherapy.

There are also interviews and Q&As with experts and laypeople, such as one with Kimberley Shilson, author of Benjee and His Brain, that examines the effect trauma has on brain development. Another looks at forced marriage through the eyes of a women who left her husband after 19 years and is living in hiding.

All the articles are researched and written by York University undergraduate psychology students with considerable writing experience, under

the guidance of Muller, the magazine’s editor. “The level of professionalism is amazing,” says Muller. There are bi-weekly story meetings where the students brainstorm ideas and work as a team in crafting and editing the articles. He encourages them to write about something that resonates with them or has some particular meaning to them.

The students are gaining an experiential education in writing, editing, researching, interviewing and the ins and outs of working on an online magazine, as well as the importance of team work.

Since the re-launch, the magazine has garnered more than 1,800 followers on Twitter. It has a Facebook page to facilitate conversations and a YouTube channel. Some of the videos are pulled in from elsewhere; some are produced by York students, including Doris: Growing Up with a Schizophrenic Mother.

Some of the other articles found in the magazine, include: “Obesity: An Insidious Effect of Childhood Trauma” and “Fighting Fire with Fire: The Truth About Violent Campaigns”.