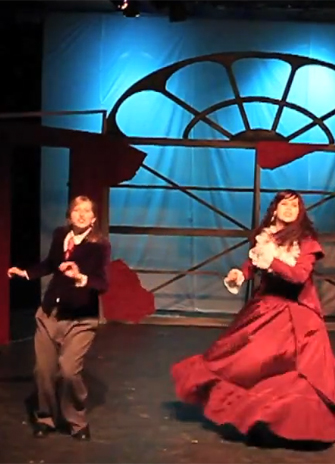 Where is Edwin Drood? That is what Vanier College Productions’ “wildly warm-hearted theatrical experience” of The Mystery of Edwin Drood hopes to find out.

A musical by Rupert Holmes, directed by Theresa Noon, The Mystery of Edwin Drood will run from Feb. 1

to 10, at the Fred Thury Studio Theatre, 258 Vanier College, Keele campus. Showtimes: Tuesday to Saturday at 8pm and Saturday and Sunday at 2pm.

To reach the theatre, take the stairs or elevator on the east side of Vanier College to the second floor. The opening act begins with the Music Hall Royale, a hilariously loony Victorian musical troupe, puting on its flamboyant rendition of an unfinished Dickens mystery. When Edwin Drood disappears mysteriously one stormy Christmas Eve, one has to wonder if he has been murdered. If so, then whodunit?

The giddy playfulness of this play-within-a-play draws the audience toward one of Drood’s most talked-about features, which allows the audience to vote on the solution as prelude to the most unusual and hilarious finale.

Tom Kerr is the music director and Keren Barak is the choreographer. The original Broadway production produced was by the New York Shakespeare Festival, produced by Joseph Papp.

Advance tickets can be purchased online until 4pm on the day of the performance. To buy tickets or for more information, visit the Vanier College Productions website. Tickets cost $12 for students (with student ID) and $20 for adults.

Reservations can be made by calling 416-736-2100 ext. 40023 with your name, phone number, date of the show you want to attend and the number of tickets you want to reserve. Reservations are held until 15 minutes prior to the start time of the performance and must be paid for (cash only) when picked up.

Tickets are also available at the door (cash only), subject to availability, starting one hour prior to the start time of the performance.

The production is sponsored by the Office of the Master, Vanier College.