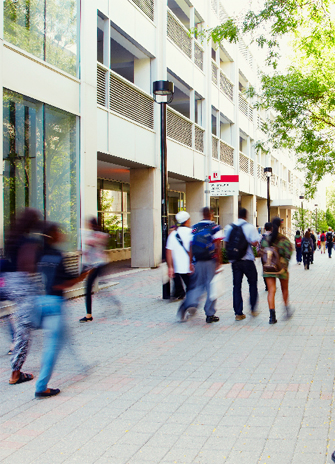 A program originating in the Faculty of Health at York University and supported by the Academic Innovation Fund (AIF) is bringing the University into the first-year classroom.

Through an initiative known as the HealthAid Network Course Based Peer Mentorship program, student representatives in 1000-level courses deliver announcements to their classmates about important assignments or exams, deadlines, support services and upcoming social events. Known as in-class peer mentoring, the HealthAid Network representatives demystify the University and introduce their classmates to the essential services and supports they need to be successful in their first-year of studies and beyond.

At regular intervals throughout the course, the HealthAid Network in-class representative brings “news” to his or her classmates. If the announcement that day pertains to an exam, the student representative may outline what exam study clinics or resources are available and where they are located on the campus. The social event announcements and invitations reduce the shyness that comes with being in a new situation and help students build important social networks.

“The literature shows that students who are engaged in their learning are more successful,” says Professor Martha Rogers, master of Stong College at York University and the AIF Project Champion for the first-year experience cluster of projects.

“The aims of this program are to support academic success and student engagement in first year while developing student leadership capacity,” says Rogers. “First-year students and upper year students are recruited, selected and trained through a pretty extensive process. The HealthAid Network teams include first-year, upper year and senior student leaders. Initial and ongoing training focuses on three components – academic success, student engagement and leadership. It is a highly structured program based on literature and empirical data related to student success and peer mentorship.”

Auroosa Kazmi, an alumna of  York University, serves as the program’s coordinator. She mobilizes the students, develops training and leadership activities for the HealthAid teams and supervises their activities. She also manages the project and the AIF budget. Working with Rogers, she is also collecting data from extensive evaluations that measure the success and impact of the program.

York is an early leader in Canada with respect to this unique kind of in-class peer mentoring, says Rogers, noting that the University’s support through the AIF has been an essential factor in the program’s success.

“The idea for this program originated by the Faculty of Health Student Caucus is a unique feature,” says Kazmi, “because it was student generated.”

“The program is theory informed and research based,” says Kazmi. “Forty-five per cent of our students actually used the resources and/or attended an event that was advertised in the classroom, this is significant as the rates in most universities is much lower.”

Now in its third-year, the HealthAid Network of course based peer mentoring is now a part of core-1000 level courses in all four of the Faculty’s undergrad programs – Nursing, Kinesiology, Health Studies and Psychology. In 2012, some 4,900 first-year students benefited from the program.

Sacha Wilson, a second-year health studies student, was a first-year representative and is now an upper year member of the HealthAid Network.  She is part of a team of students who are HealthAid Network peer mentors. Most teams are composed of two senior mentors and and up to four representatives. The teams meet twice a month and participate in workshops, leadership activities, tours of academic support services, and more. The first-year students also bring questions from their class to the team meeting and takes answers back to their class.

Wilson says she enjoys the workshop component of the twice monthly meetings. “Workshops cover a lot of topics such as academic life, maintaining balance, leadership, conversation skills , study skills, even how to be organized,” she says. “They are pretty intense and helpful.”

As the upper level student on the team, Wilson manages the team recruitment process.

What has she gained from the HealthAid Network experience?

“Before I came to York, I was at another university for two years,” she says. “I was not involved or engaged and I felt isolated and overwhelmed because I didn’t know how to reach out and make friends and connections. I ended up leaving.”

Wilson says she spent time thinking about what she wanted to do with her life and came to York University. “I knew that if I was going to be successful, I had to do as much as possible, to get involved both scholastically and personally, make friends and do well.”

As a first-year HealthAid Network in-class representative, Wilson says she benefited greatly from the experience because it gave her connections and friendships. “The fear factor dropped because I got to know my classmates,” she says. “People used to come up to me after the announcements and sometimes they said wanted to go to an event, but felt weird. I would tell them to come along with me to whatever it was – a dance or party.”

She is an active volunteer outside of class and works with the Institute for Health Improvement.  “I am also in the process of starting a maternal and newborn health group and I want work on getting the word out about the terrible conditions in Haiti for women, newborns and children,” she says.

Wilson credits the HealthAid Network with helping her embrace her university life. Best of all, she says that she has learned important skills in maintaining a balance in her life and she always gets her homework done.

“This is a great leadership opportunity for our peer mentors who serve as team leads and we are in our recruitment process now for next year,” says Kazmi.  The application deadline is Feb. 11 by 11:59pm. Applications for the HealthAid Network can be found at http://www.surveymonkey.com/s/APPLYSSL.