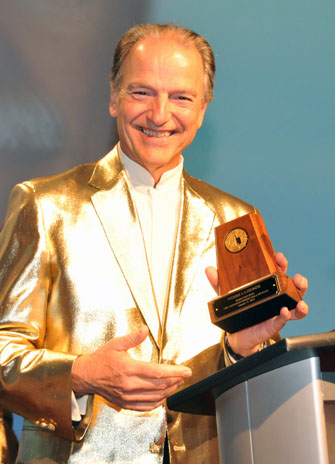 On Jan. 15, at a gala celebration, two of York University’s most generous supporters – “the Golden Brothers” – appeared onstage together to celebrate new members inducted into the Canadian Mining Hall of Fame.

The induction of Lassonde into the Mining Hall of Fame came in recognition of his exceptional success in the mining industry. It was also a tribute to his many years of public service and generosity in support of entrepreneurship and higher education.

“The event is a fitting tribute to the outstanding contributions of all the inductees in driving innovation, growth and philanthropy in the mining industry, and that includes our friend Pierre Lassonde,” said Lassonde School of Engineering Dean Janusz Kozinski.

“The sight of the two Hall of Famers and friends of York looking resplendent in their matching gold jackets was a memorable moment for everyone present,” added Kozinski.

Most recently Lassonde donated $25 million to launch the Lassonde School of Engineering that will empower creative minds to change the world. The Lassonde School will focus on allowing students to become “Renaissance Engineers” with skills in entrepreneurship, social responsibility and problem solving – through a revolutionized classroom environment, multidisciplinary curriculum and integrated learning delivered in partnership with industry.

The Lassonde School will welcome students and faculty later this year, with a new building opening on the Keele campus in 2015.