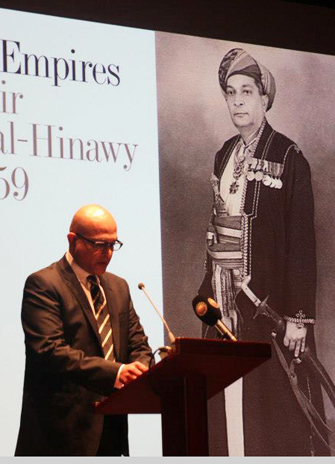 Between Empires: Sheikh-Sir Mbarak al-Hinawy 1896-1959, an illustrated biography by York anthropology Professor  Zulfikar Hirji, which will launch Wednesday, encompasses the last decades of the imperial and colonial era in present-day Kenya.

The launch, including a panel discussion, will take place, from 4 to 5:30pm, Wednesday, Jan. 30, 519 York Research Tower, Keele campus. Everyone is welcome to

attend. Refreshments will be served. The discussion is part of the Empire Series, a joint project of the departments of anthropology, history and sociology. The book launch is sponsored by the Department of Anthropology and  the York Centre for Asian Research.

Zulfikar Hirji at the book’s launch in Oman

History Professor Joan Judge and sociology Professor Radhika Mongia, both of the Faculty of Liberal Arts & Professional Studies will discuss the themes of the book, with history Professor Tom Cohen as the moderator.

Between Empires is a critical account of a man of Omani-Arab-Muslim descent, who lived in the last decades of the imperial and colonial era, and witnessed the rise of African nationalism from his home in Mombasa, the coastal capital of present-day Kenya. The book draws on a family archive of pictures and documents, in its account of Sheikh-Sir Mbarak al-Hinawy,exemplifying the many untold stories and struggles of non-European local leaders who steered their communities through the last decades of colonial rule.

Mbarak served as governor for the Coast of Kenya from 1941 to 1959, and before that as governor of Mombasa from 1937 to 1941. And, the book also details Mombasa’s transformation, in the early 20th century, from a local dhow harbor on the Indian Ocean to a cosmopolitan port city.

The audience at the launch in the Bait Al Zubair Museum, Oman

In the book’s introduction, Hirji writes that “Sheikh Mbarak’s life and times traverse the final decades of empires on the western edge of the Indian Ocean. He was born in 1896 to a prominent Arab family who arrived from Oman sometime in the 1800s and eventually settled in Mombasa. Historians and other scholars of Britain and Africa have rarely examined the life histories of East Africa’s coastal personalities or statesmen and they have only recently begun to explore the social histories of its diverse and complex communities.”

Beyond that, Hirji explains that the book “seeks a broader historical understanding, Sheikh Mbarak’s life-long

commitment to developing his community, society and city through education, political reform and civic projects reflects a cosmopolitanism that belies approaches and understandings of non-European societies and peoples as myopic and resistant to change. It is for these reasons that Sheikh Mbarak’s life and times are worthy subjects of historical reflection.”

Between Empires: Sheikh-Sir Mbarak al-Hinawy 1896-1959 at the museum in Oman

Hirji is also the co-author of The Ismailis: An Illustrated History (2008) and editor of Diversity and Pluralism in Islam (2010). He first launched Between Empires in Oman in late December at the Bait Al Zubair Museum with Sayyid Shihab bin Tareq al Said, adviser to the Sultan, in attendance as well as many members of the Sheikh Mbarak’s family.

His research focuses on Muslim societies and cultures in a variety of contemporary and historical contexts, including Sub-Saharan Africa and the Western Indian Ocean.