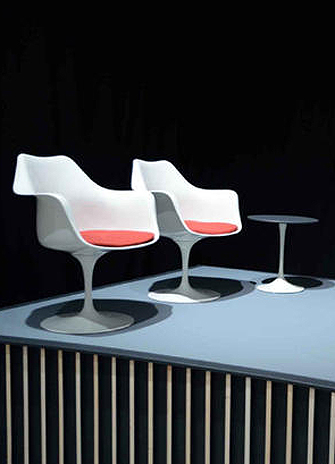 A bold exhibition by Toronto artist Deanna Bowen on now at the Art Gallery of York University (AGYU) presents a view on the Ku Klux Klan (KKK) during the American Civil Rights Movement era, as well as its century-long history in Canada.

Yes, in Canada. This radical new project stems from Bowen’s inquiry into her own ancestry of Black pioneers who emigrated from Oklahoma to northern Alberta in the early 20th century; a crossing mirrored by the Klan.

Invisible Empires, produced with the generous financial support of Partners in Art, will be at the AGYU until March 17. Admission is free.

The Klan Comes to Town from “This Hour Has Seven Days”, CBC Studios, Toronto, Oct. 24, 1965, part of artist Deanna Bowen’s installation, Invisible Empires, which focuses on the Ku Klux Klan and its mirgration to Canada. The stage is the main work in the show, where a live performance on Jan. 16 re-enacted an interview between Calvin Craig, grand dragon of the Georgia Realm of the United Klans of America and the Knights of the Ku Klux Klan, his fellow klansman George Sligh; civil rights activist Reverend James Bevel, and “This Hour Has Seven Days” host Robert Hoyt. A video of the re-enactment will be shown throughout the exhibition.

Her autobiographical approach and archival investigations, though, deviate in her exhibit Invisible Empires, curated by Philip Monk, AGYU director. Documents no longer serve the purpose of memorializing a traumatic past experience by means of an empathetic act of witnessing in the present, working through the traumatic archives of memory. Instead, Bowen “crosses the line” into enemy territory by working with an archive of Klan material.

“Working through” takes on a whole new dimension when the archives that supposedly are memorialized are those of the KKK, and when these documents and scenarios are re-enacted in the present for us to witness, and re-live.

Laying it on the line, Bowen in fact creates the KKK’s archive, memorializing it to another purpose and implicating us as spectators. In this endeavor, she further crosses the line of what is expected or “permitted” of a Black artist by, in effect, reversing her area of concern from Black studies to White studies.

This pioneering new work painfully breaks open the polarizing positions of racist ideologies embedded in the Klan’s history, as well as the discourses that evolve out of them, by placing people squarely at the centre of the debate today. Is it a line to be crossed or a line to be drawn?

The exhibit includes a commissioned performance re-creation of a 20-minute Oct. 24, 1965, CBC television interview between Calvin Craig, grand dragon of the Georgia Realm of the United Klans of America and the Knights of the Ku Klux Klan; his fellow Klansman George Sligh; Civil Rights activist Reverend James Bevel; and “This Hour Has Seven Days” host Robert Hoyt.

Once you’ve crossed the line, there’s no turning back. This iteration of AGYU Vitrines is part of Deanna Bowen’s exhibition and intimately connected to its strategies of presenting KKK material without necessarily revealing a critical context. Here the banners of Klavern Number 10 of Red Bank, New Jersey, with their kitschy symbolism, are reproduced as backlit advertising in the public spaces of York University, beyond the symbolic and critical space of the gallery: perhaps a line that shouldn’t be crossed?

For more information, including gallery hours of operation, visit the AGYU website.