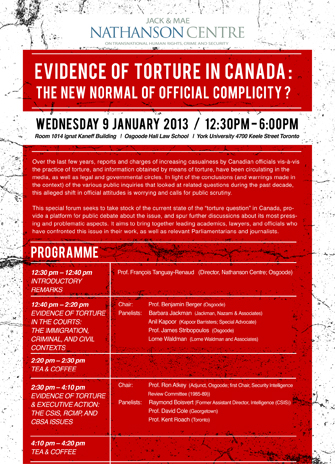 Canadian policies and actions on issues related to torture will be on the agenda at a special forum Wednesday where panellists will discuss topics, such as the use of evidence in Canadian courts obtained by means of torture.

The forum, Evidence of Torture in Canada: The New Normal of Official Complicity?, will take place Jan. 9, from 12:30 to 6pm at the Jack and Mae Nathanson Centre on Transnational Human Rights, Crime and Security, 1014 Ignat Kaneff Building, Osgoode Hall Law School, Keele campus. Everyone is welcome to attend the event.

foreign powers and the government’s position on torture in armed conflicts such as the Afghan conflict.

The forum seeks to take stock of the current state of the “torture question” in Canada, provide a platform for public debate about the issue, and spur further discussions about its most pressing and problematic aspects.

Parliamentarians, former civil servants, journalists, advocates and academics will examine how the federal government has treated issues of torture in recent years, notably in light of the conclusions of relevant public inquiries held over the past decade.

Professor François Tanguay-Renaud, director of the Nathanson Centre, will introduce the topics at 12:30pm, followed by three panels:

Evidence of Torture in the Courts: The Immigration, Criminal, and Civil Contexts (12:40 to 2:20pm)

Evidence of Torture & Armed Conflicts: Afghan Detainees and Other Cases (4:20 to 6pm)

For more information, visit the Jack and Mae Nathanson Centre on Transnational Human Rights, Crime and Security website or contact Lielle Gonsalves, assistant to the Nathanson Centre, at lgonsalves@osgoode.yorku.ca.