Hundreds of York University students, staff and faculty made their way to York Lions Stadium on Aug. 22 for the celebration of “the next era of athletics and recreation at York.”

The event, #HeartOfALion Day, brought the campus community together for the official unveiling of the new Lions logo that features a sleek and fierce-looking lion head in York’s signature red. Also unveiled was the new Lions mascot – a lion with an updated face – which has not yet been named.

Jennifer Myers, executive director of Athletics and Recreation at York, told the crowd that the new branding and image was more than a year and a half in the making.

“It’s something we’ve been trying to do for a long time,” she said, adding that the York community was consulted during the process. 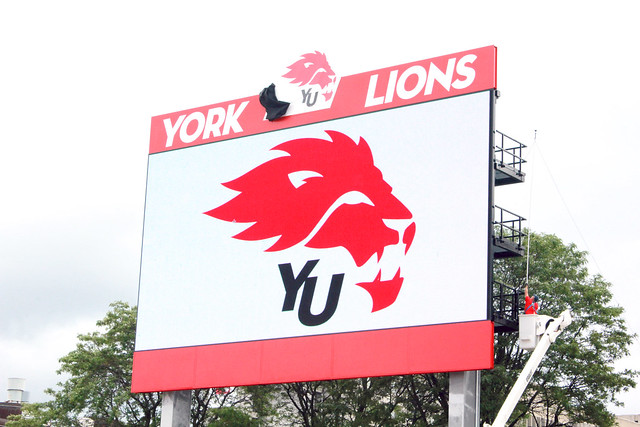 One of the key contributing factors to the new logo was the question “What does it mean to be a Lion?” in a pan-University context.

“We needed something that would embody the entire student population,” she said, adding their research produced great insight.

The common attributes of a Lion, they found, are: being open and accepting of everyone in the “pride”; being courageous, persevering and standing up for what you believe in; having the heart of a lion; and being a leader.

Myers described the new logo as being “magnetic, confident and instilling that sense of real pride.”

The final piece of the new branding will be to give the York Lions mascot a new name. Students, staff, faculty and alumni are welcome to make suggestions on Sept. 4 during the student orientation happening at the York Lions Stadium. The winning name will be announced at halftime during the Sept. 29 football game.

The event also featured students modelling the new line of branded clothing (available at the York University Bookstore and at Tait McKenzie) as well as two raffle winners.

A video of York University President and Vice-Chancellor Rhonda L. Lenton’s reaction to the new branding was screened for guests at the event, and a second video titled “Heart of a Lion” played as the finale to the day.