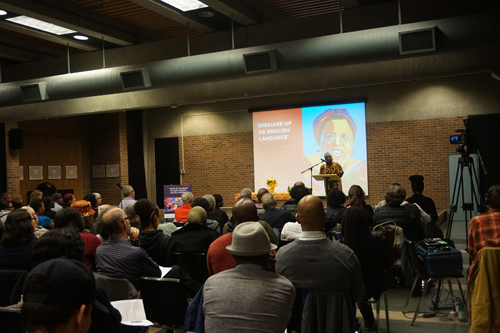 A capacity crowd was in attendance for the Michael Baptista Lecture

“Unifying” was the word University of the West Indies Professor Emerita Carolyn Cooper, the keynote speaker at the annual Michael Baptista Lecture, used to express the spirit of the Honourable Louise Bennett-Coverly when she addressed the large and diverse audience of students, faculty and community members. The event took place Thursday, Nov. 3.

The Centre for Research on Latin America & the Caribbean (CERLAC) at York University coordinated the 2016-17 lecture in commemoration of both Michael Baptista, a Guyanese immigrant and former senior vice-president of the Royal Bank of Canada, and Bennett-Coverly, Jamaica’s beloved and iconic poet commonly known as “Miss Lou,” who received an honorary degree from York in 1998. As Professor Andrea Davis, chair of the Department of Humanities and former interim director of CERLAC said, “By paying tribute to these two exceptional lives, the event offered an example of the very best that can emerge out of the spirit of cooperation that links Canada and the Caribbean.”

Cooper, recently retired professor of literary and cultural studies at the University of the West Indies (Mona campus), delivered an account of the life of “Miss Lou.” Her lecture, titled “‘Disguise Up De English Language’: Louise Bennett’s Anansi Poetics,” articulated the importance of “Miss Lou” as a consolidating force in Jamaican culture. Similar to the trickster Anansi, she succeeded in expressing Jamaican cultural identity across racial, gender and class lines using a multitude of voices.

Cooper discussed Bennett-Coverly’s efforts in “helping us to take language seriously and recognize its potential as a means of realizing a common Jamaican identity.” Bennett-Coverly was concerned with correcting the widespread disregard of African-derived language in Jamaica. Much of her work focused on the recovery of Jamaica’s original “dialect,” while refuting the elitist perception of the language as “corrupt.”

Additionally, Cooper drew on Bennett-Coverly’s use of folklore to portray the role of her art in resisting class servitude, in showing how the mighty was often outwitted by the powerless, and by employing the Anansi figure to “play the fool.” She also emphasized Bennett-Coverly’s portrayal of the “cunning Jamaican woman” as increasingly relevant to modern times. Bennett-Coverly successfully utilized Anansi poetics to elucidate subversive attempts to reassert humanity in the face of class and racial subjugation.

Davis explained the importance of the lecture to CERLAC and the University: “The lecture is a powerful endorsement of CERLAC’s continuing commitment to community-engaged research and socially progressive scholarship and its role in bridging the gap between Canada, the Caribbean, and South and Central America.”

Indeed, individuals of Latin American, Caribbean and African descent living in Canada are tasked with the burden of adapting to mainstream society often with little or no guidance. The 2016-17 Michael Baptista Lecture brought together these constituents in genuine exchange as was evident in the laughter and shared emotion that marked the diverse gathering. Faculty of Education Professor Carl James, the Jean Augustine Chair in Education, explained: “Lectures like these provide for local communities to be on campus and engaged in intellectual exchanges. This Michael Baptista Lecture, with a renowned scholar of Jamaican background, provided that rare and vital intellectual space.”

Alan Durston, acting director of CERLAC, spoke about how “one of CERLAC’s functions is community outreach in the GTA, and this was very much in evidence at the event. A significant number of people from the Jamaican and Caribbean community were in attendance, and there were quite a few whose laughter indicated that they understood the witticisms in Jamaican before Dr. Cooper provided a translation.”

The Michael Baptista Lecture was established by the friends of Michael Baptista and the Royal Bank of Canada (RBC) to recognize the areas central to his spirit and success: the importance of his Guyanese/Caribbean roots, his dedication to and outstanding achievements at the RBC, and his unqualified drive and love of learning. This year’s lecture was sponsored by CERLAC, in partnership with the Jean Augustine Chair in Education, Community & Diaspora; the Department of Humanities; and the Harriet Tubman Institute for Research on Africa and its Diasporas.

Written by Carlo Panaro, student in HUMA 1300, Cultures of Resistance in the Americas, with photography by Niloofar Abedzedah, a work study student in the Department of Humanities