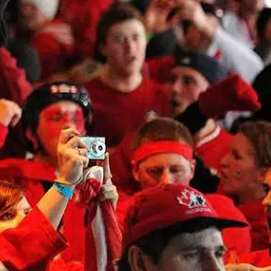 Rabidly infectious fans are needed to spread the excitement or infection of the National Hockey League (NHL) if its expansion into new cities is going to be a success, according to new mathematical modelling out of York University.

Although mathematical modelling is usually used to track infectious diseases, it can just as easily be used to figure out whether the National Hockey League (NHL) should expand into the GTA, Quebec City, Kansas City or Seattle. York U Professor Jane Heffernan, director of the Centre for Disease Modelling, and her two fourth-year students, Jennifer Light and Alina Chernin, compared fan allegiance to an infectious disease transmission in their new study to find a good fan base for the next NHL team.

“NHL expansion and fan allegiance: A mathematical modelling study,” was published in the journal Mathematics-in-Industry. It’s an interesting way to apply math to an everyday problem, in this case, where should the NHL expand to and why. As fan allegiance spreads mainly through contact with other fans, the researchers used an epidemiological model to track transmission.

“Fans are hugely important to the health of the NHL. They are very dependent on merchandise sales for viability,” said Heffernan.  Fans can make or break a team’s success. “Some teams need highly infectious fans to be viable. In Toronto, we have a lot of good chronically infected fans. That’s why the Toronto Maple Leafs do very well even though they don’t win a lot.”

What the researchers ultimately found was that Quebec City would be an ideal place for the NHL to expand next, but Las Vegas, where the NHL has already decided to expand to in 2017, is not. In addition to infected fans, city temperature and gross national product also play a part in team viability. “Poor performance and poor location usually leads to a lack of fans,” said Heffernan.

As fans go, some are temporarily infected – they jump in and out depending on how the team is doing – and others are chronically infected – they cheer for their team no matter what, talk about the games, watch their games, buy tickets and merchandise and generally infect others.

“If the team is doing really well that is also infectious,” said Heffernan. And that is what sparks the infection in temporary fans. So Toronto Maple Leafs centre, Auston Matthews, scoring four goals in his regular season debut game against the Ottawa Senators, will certainly get both fan types excited about the team.

If Las Vegas wants to be successful, they should look to Phoenix where Matthews spent time watching the then Phoenix Coyotes play. That city has tried to build a fan base through generating excitement for the game and building arenas to support that interest from a young age.

And, they should try and infect more fans!