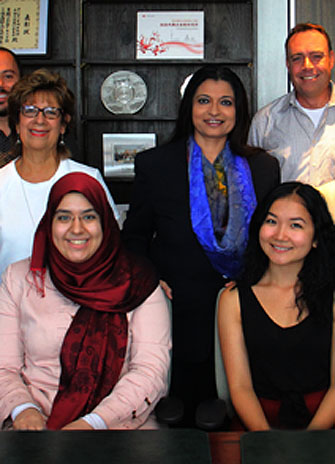 Designed for international students of exceptional merit, the program offers the opportunity to pursue a double major — a combination of two programs resulting in a distinctive degree.

The newly arrived World Scholars join a Faculty that is already home to students from 127 countries, immersed in a global experience right on campus.

“Above and beyond their academic achievements, the World Scholar applications were very impressive,” says Narda Razack, associate dean, Global and Community Engagement. “The students demonstrated leadership, community engagement and a vision of themselves in five years. They also applied strategic sophistication and presented a compelling rationale in choosing their double major.”

The YWS application is competitive, assessing academic success and students’ motivations and goals for studying their specified majors. “The application process was intended to be an invitation to ignite their imagination, and we were fascinated by the responses we received,” says Mukherjee-Reed. “We would like to build up to a core of 30 World Scholars by 2020 who would choose double major combinations in the humanities, languages, social sciences and professional programs. We encourage all our students to explore combinations of subject areas which can help them distinguish themselves from their peers. As I like to say to our students, ‘we accept no boundaries in the world of knowledge. Neither should you.’”

The World Scholars attend a retreat at the end of their second year to reflect on completing the first half of their degrees and to gain advice and insights for success in the second half.  As part of the Dean’s Circle of Scholars, the World Scholars will be mentored continuously to seek out research or experiential learning opportunities available at York.

“This year was a soft launch of the program and we were delighted with the response we received. I am very grateful to Carol Altilia, and her Registrarial team and my own administrative team for launching it so quickly,” says Mukherjee-Reed “For the next academic year, we are planning a bigger rollout and expecting an even greater response from international students of exceptional merit.”