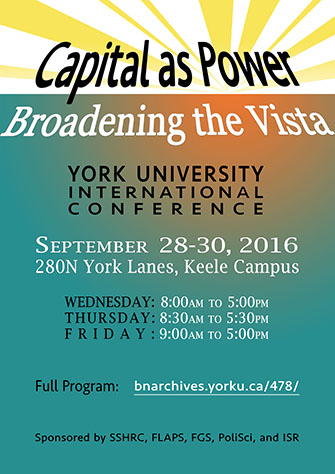 The fourth conference by the Forum on Capital as Power, titled Capital as Power: Broadening the Vista, will be held Sept. 28 to 30 in 280N York Lanes on York University’s Keele campus. The conference is free and open to the public. All are welcome to attend.

Existing theories of capitalism, both orthodox and unorthodox, view capitalism as a mode of production and consumption. However, there is a different view, one that espouses capitalism as a mode of power, and in so doing incorporates diverse power processes ranging from ecological change and genetic engineering, to the limitation of art and the leveraging of religion, to war and incarceration as integral dimension of accumulation.

This alternative view is the theory of capital as power (CasP), and it offers a radical alternative to mainstream and Marxist theories of capitalism. It argues that capital symbolizes and quantifies not utility or labour but organized power writ large, and that capitalism is best understood and challenged not as a mode of consumption and production, but as a mode of power.

The study of capital as power began when York political science Professor Jonathan Nitzan and his colleague and friend Israeli political economy Professor Shimson Bichler were students in the 1980s. It has since expanded into a broader project, involving a growing number of researchers and new areas of inquiry. The 2016 conference broadens the vista of this approach.

“This conference is an interdisplinary event,” says Nitzan. “Following the conference, the papers presented will be published in a special edition of the Review of Capital as Power.”

With 25 papers on a wide range of topics, presenters will extend and deepen CasP research, compare CasP with other approaches, and critique CasP’s methods and findings. An international cohort of scholars will be presenting their research at the conference.

“Our society is currently on the verge of crisis,” says Nitzan. “The theory of capital as power presents an alternative theoretical approach that is unlike Marxism or neoclassical economic theories. The papers that will be presented at the conference offer fascinating and interesting insights into capitalism as a mode of power – as well as the asymptotes or limits of that power.”

Broad conference session themes explore through the lens of CasP issues surrounding capital and state, the sharing economy, research methods, accumulation as an operational symbol, the stock market, derivatives and speculation, the transformation of physical space, regimes of accumulation and globalization, corporate taxation and the public debt, food production, the Hollywood film business and the emerging role of China as a force in entertainment, plus much more.

The conference is supported by the Social Sciences & Humanities Research Council of Canada (SSHRC). Additional financial assistance is offered by the Faculties of Liberal Arts & Professional Studies and Graduate Studies; the Office of the Vice President, Academic & Provost; the Department of Political Science; and the Institute for Social Research.