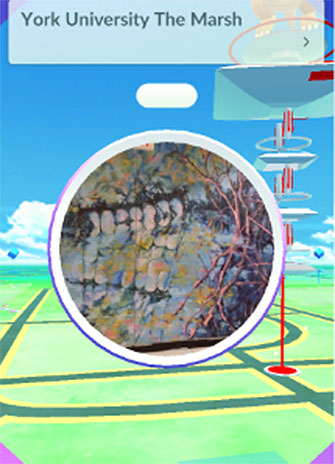 York University professors who struggle with cell phone presence in their classrooms may be in for a tougher “battle” with the release of the Pokémon GO video game, a York University study has found.

The student-authored report on Pokémon GO, “Pokémon GO: Keele Campus,” warns of fall term disruptions on campus due to the augmented reality game.

Since its release on July 17, Pokémon GO has exploded in popularity and has held a top spot in Apple’s App Store. Because of its mass appeal and real-world application, the game has caused disruptions from coast to coast.

Their efforts were made at the request of Professor Jon Sufrin, a Writing Department faculty member who was concerned about the game’s impact on the classroom environment.

“If a Dratini (a rare Pokémon) shows up, I suspect more than a few cell phones might appear, or the hall might get a rush of visitors,” said Sufrin.

The game uses GPS location services and a virtual reality overlay on a phone’s camera to allow players, or “trainers,” to catch Pokémon in the real world. Since players have to access the game in popular public areas such as parks, community centres and schools, it has increased foot traffic in these areas.

Besides catching Pokémon, the game encourages players to visit Pokéstops to receive free items such as pokeballs, potions and eggs, and Gyms to train captured Pokémon. There, players can attach “lure” modules and attract Pokémon for up to 30 minutes.

The modules not only attract Pokémon, they also naturally attract other players (or “trainers”) hoping to “catch ’em all.” Pokéstops are the most common areas to run into other trainers, and since these stops are strategically placed they naturally become points of congregation.

Shaw and Wilcox located most of the on-campus Gyms and Pokéstops (see map). The stops did not appear inside any major lecture halls or classrooms – a relief, perhaps, for professors concerned about the game affecting their teaching.

Sufrin also voiced concerns about the locations of the Pokéstops, due to reported cases of inappropriate stop locations around the world. Fortunately, the majority of the stops on York’s Keele campus are attached to public art pieces.

The locations of the Pokéstops were determined by players of a prototype game called Ingress, which is why the stops appear at memorials and art pieces rather than random locations or retail hubs. The Ross Building and Vari Hall, for example, have a particular concentration of Pokestops and Gyms due to the many paintings and art objects located there.

So what does this mean for York? The study suggests that students will experience campus in a new way; instead of trudging from class to class, students could be on the hunt for the murals in Curtis Lecture Hall or the memorial stones outside William Small Centre. However, the Pokémon GO fad could also mean a lot more congestion with students playing and congregating along Campus Walk or around Ross, the Life Sciences Building and other popular areas.

The study further suggests that Vari Hall and the Ross Building could become even busier mid-afternoon, as students move through these central locations perhaps more concerned about the Pidgeotto on their screens than the people in front of them.

Students may want to find alternate routes to their classes to avoid the clogged hallways in the fall when the diversity of Pokémon and Pokémon trainers flourish, say Shaw and Wilcox, who met several trainers during summer while researching the subject.

The fall influx of students illustrates why many schools are concerned about safe playing practices. Shaw and Wilcox say trainers on campus should be encouraged to stay safe and connect with other players.

More information about Pokémon GO on Keele campus can be accessed from the report found here.

Written with files from Mackenzie Shaw