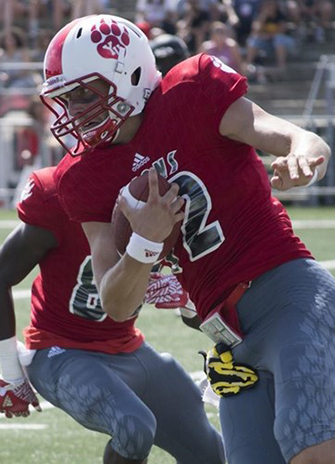 The starting pivot from Calgary went 17-for-25 for 331 yards and also threw one interception.

Two of his touchdown passes were to his brother, Colton Hunchak (Calgary), who finished with 149 yards on three receptions. His first touchdown was a beautiful 77-yard catch and run play up the sideline on the first play of the drive that made it 22-3 for the Lions, while his second came early in the third quarter and stretched York’s lead to 29-13.

Rookie receiver D’Saun Greenaway (Brampton, Ont.) also recorded two touchdowns on the afternoon. He caught his first on the final play of the opening quarter for a 32-yard score, and added a second in the fourth quarter for the final points of the game from back-up quarterback Matt Krason (Brantford, Ont.).

Krason, a rookie playing in his first game, added a pair of one-yard rushing touchdowns in the game, including the first score late in the opening quarter.

Reigning OUA rookie of the year Jesse Amankwaa (Etobicoke, Ont.) was dominant to start the game, picking up 64 rushing yards on 12 carries and adding another 35 on three catches. Overall, seven different players rushed the ball for the Lions, with rookie running back Kayden Johnson (Kerrobert, Sask.) leading the team with 75 yards on nine carries.

The game remained scoreless for most of the first quarter, until Brett Hunchak led his team down to the one-yard line and Krason punched it in for a 7-0 lead. They added another score right at the end of the quarter to make it 14-0.

After a rouge on a kick-off by Nick Naylor (Abbotsford, B.C.), Waterloo got on the board with a field goal by Caleb Girard (Waterford, Ont.) to make it 15-3, but less than one minute later the Hunchaks connected for a 22-3 lead.

The Warriors got their first major score with two minutes remaining in the half on a touchdown pass by Mitch Kernick (Elmira, Ont.), and nearly added another right before the end of the frame but had to settle for another Girard field goal, and the Lions led 22-13 at the break.

The Lions dominated after coming out of the locker room for the second half, scoring three touchdowns in the third quarter and another two in the fourth to round out the scoring. They finished with 546 yards and 30 first downs, while Waterloo amassed 414 yards and 23 first downs. The Warriors also benefited from some mistimed penalties from the Lions, getting seven first downs as a result.

Waterloo quarterback Lucas McConnell (Waterford, Ont.) finished 17-of-40 for 283 yards, with one touchdown and one interception.

The Lions will be on the road in Week 2 when they travel to Waterloo, Ont., to face the Laurier Golden Hawks on Monday, Sept. 5 at 7:30pm. The Warriors, meanwhile, play their home opener against the Ottawa Gee-Gees on Monday at 1pm.