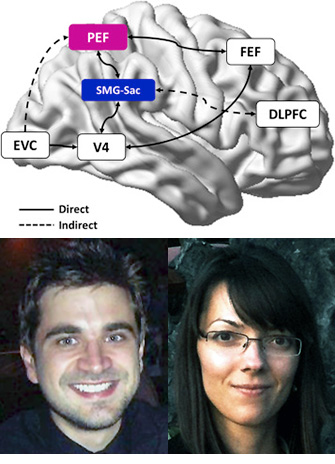 Research undertaken at York University has shown, for the first time, areas of the brain that are sensitive to whether an object looks the same, or different, after making an eye movement.

Recently published in the journal Cortex, the findings in “Trans-saccadic interactions in human parietal and occipital cortex during the retention and comparison of object orientation” give York credit as the first to pinpoint where in the brain these signals appear.

“The challenge is understanding how these two things link together,” said Crawford, “especially when we keep moving our eyes all the time.

“When you see something happen, and then make a rapid eye movement (a saccade) to another location, how does your brain piece it all together to retain what things were, and where they were?”

A hypothetical example of this function would be a witness remembering which face matched which location at a crowded crime scene.

Using a variant of functional MRI (fMRI) adaptation, according to the study, the team recorded brain activity when a subject fixated to the left or right of a briefly presented visual grating, maintained fixation or saccaded to the opposite side, then judged whether a re-presentation of the grating has the same or different orientation.

“We are the first to show these signals in the human brain.”

Crawford said while the findings are significant, past studies from his lab indicate these processes are not guaranteed, and could be susceptible to things like fatigue, brain damage, disease.

“Any of these could disrupt the function,” said Crawford, who added the research could spark investigations into health applications for the findings.

Studies on the subject will continue in Crawford’s lab with a focus on identifying whether these areas of the brain are “the” special trans-saccadic areas. Their future research will look at how the brain responds to different stimuli and different types of eye movement.