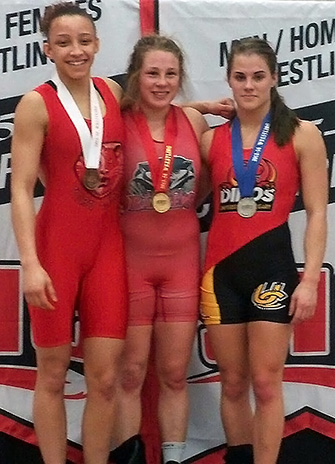 Alexandria Town made history as she became the first female wrestler in the history of the York Lions wrestling program to win a medal at the Canadian Interuniversity Sport (CIS) Championships, picking up the bronze medal in a thrilling match in the women’s 55kg category. The 2016 addition of the CIS Championships took place in St. Catharines, Ont., on the Brock University campus over the course of two days on the weekend.

Town’s (Scarborough, Ont.) road to the bronze medal was a tough one as she went 1-1 through the preliminary round and was matched up against eventual gold medalist Carlene Sluberski of Brock on day one of the tournament. Sluberski, a current USA National Team member and reigning CIS gold medalist, defeated Town on points in hard fought match. Town also matched up with Sheina Fisher in the preliminary round, defeating the University of Alberta product 11-0 in a dominating performance, securing her spot in the bronze medal final.

After a night’s rest, Town was matched up against a familiar foe in Julie Steffler of Western in the bronze medal match. Town and Steffler have a history as they were matched up on several occasions earlier in the season, with Steffler coming out on top each time. Knowing this was a likely matchup at some point during the tournament, Town and York head wrestling coach Eamonn Dorgan game planned for Steffler and practiced several defenses to her favoured moves in the lead up to the tournament.

When the bell rang Town executed her game plan flawlessly and defended all of Steffler’s attacks exceptionally well. The two evenly matched competitors engaged in a technical match throughout, until Town executed a thrilling hip toss throw to a pin on Steffler, ending the match and making history with the bronze medal win.

Town adds the CIS medal to her history making career at York, as she also became the first female wrestler to win a medal at the OUA Championships last season. Off the mat, she was also named winner of the CIS Fair Play Award at the Awards Banquet on Saturday evening.

Lions heavyweight wrestler Tyler Tate-Austin (Brampton, Ont.) also had solid weekend as he won his final match of the tournament 12-1 to finish in fifth place in the men’s 120kg category. The first-year Lion qualified for the CIS Championships with a bronze medal at the OUA Championships, two weeks ago at Algoma University in Sault Ste. Marie, Ont.

Both wrestlers will be back with the Lions when 2016-17 season kicks off next fall. More details on the York Lions website.