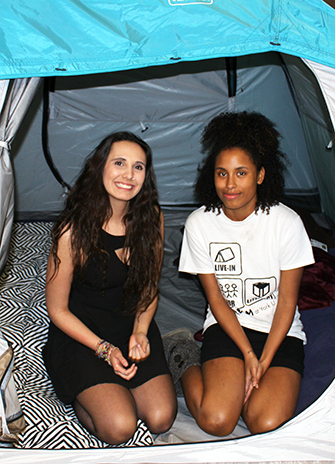 Those are the numbers that count in this year’s Live-in for Literacy (LIL) event that has two York U students “camping out” in Scott Library from Jan. 31 to Feb. 5 to raise funds and awareness for world literacy.

The annual event on campus organized by DREAM@YorkU (the local chapter of Discover the Reality of Educating All Minds) puts two willing volunteers near the front entrance of Scott Library for the week, where they remain day and night, except to attend class and have a shower.

This year, Minna Muralles and Keisha Erwin have set up camp in the hopes of raising funds for the non-profit organization Room to Read by collecting cash donations and selling DREAM@YorkU swag.

While “living” in the library, the students will engage with library patrons, York U community members and share information about the cause they are supporting.

So far, they say, the support has been extremely positive.

“It’s really different to have this kind of interaction with people,” said Muralles. “The people that do stop have been 100 per cent supportive.”

Erwin said she chose to participate in the event to increase awareness about the “privileges we have that other people take for granted”, and to highlight that not everyone has the same access to literacy and education.

The team is hoping for a particularly successful outcome on Feb. 3 and 4, when Scott Library will match donations dollar-for-dollar.

Proceeds from donations will go towards funding various educational programs, such as school and library building in developing countries.