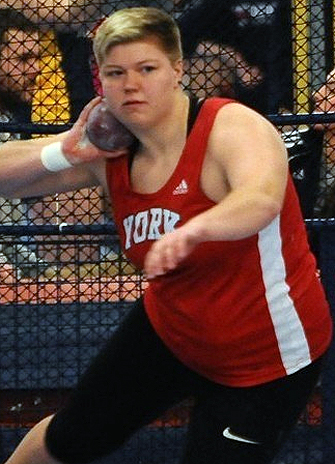 Thrower Brittany Crew had a career day on home turf as the Lions track and field team enjoyed a highly successful meet on Saturday, Jan. 30 at the 45th annual York Open at the Toronto Track and Field Club (TTFC).

Crew started her day on Saturday morning by throwing for a personal best, and a York school record and York Open meet record in the women’s weight throw by launching a 19.38-metre toss. She followed that up on Saturday afternoon in the women’s shot put with a 17.78-metre throw, which also set a personal best, school record and meet record as well as the facility record for the TTFC. She easily outdistanced her closest competitors in each event as she brought home two gold medals.

Crew wasn’t the only Lion to bring home some hardware in the throwing events as Chris Preece continued his strong season by placing first and hitting a personal best with a 19.33-metre heave in the men’s weight throw.

Nick Fyffe and Samuel Adams led the way for the Lions field team as both met the Canadian Interuniversity Sport standard and picked up gold medals in their respective events. Fyffe landed a personal best of 14.92-metre in the men’s triple jump while Adams vaulted himself to a season best of 4.80-metre in the men’s pole vault. Fyffe was followed by teammate Richard Jansen who finished in second place after a triple jump of 14.42-metre. Meanwhile, on the women’s side, third-year student Holly Pitters reached the top of the podium as she hit a 5.88-metre long jump to beat her closest competitor by 20 centimetres.

Not to be outdone, the Lions track athletes also had several strong performances on their home track. Senior Bismark Boateng was on his game as he ran to a second place finish in the men’s 300-metre in a time of 34.50. He also ran the lead leg for the men’s 4 by 200-metre relay team on their way to a gold medal finish. Dereck Djan, Daniele Orsini and Brandon Shokour in the anchor position ran the remaining three legs as the team narrowly defeated the second place Western University Mustangs in a time of 1:30:13.

Spurred on by the home crowd many other Lions set personal bests and met the Ontario University Athletics (OUA) standard for their events, qualifying them for the OUA Championships in Windsor, Ont., on Feb. 26-27.

The Lions are next in action on Friday, Feb. 5 when they compete at the Sharon Anderson Memorial Meet hosted at the University of Toronto.