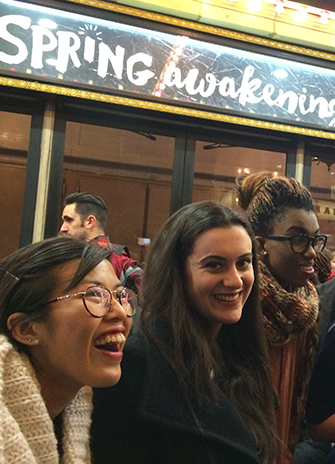 A group of students from the School of the Arts, Media, Performance & Design (AMPD) had the experience of a lifetime when they travelled to New York City last semester to see Sleep No More by the U.K.-based production company Punchdrunk and Deaf West Theater’s Spring Awakening.

The 32 students were accompanied by AMPD theatre Professors Gwenyth Dobie, Ian Garrett and Laura Levin. The trip gave the students an opportunity to apply the theories they had learned in the lecture hall in an experiential education setting.

Sleep No More, which premiered in 2003 in London, has been running in New York City since 2011 to sold-out crowds. The production features roaming audiences who experience storytelling inside theatrical worlds. In Levin’s book Performing Ground: Space, Camouflage and the Art of Blending In, she discusses this unique form of this environmental theatre piece, exploring how it blurs boundaries between spectators and performers and turns the world of Shakespeare’s Macbeth into an immersive choose-your-own-adventure game. The trip to New York to see Sleep No More animated her writing and teaching with a concrete learning opportunity for the students.

“Sleep No More was unlike any show I have seen,” said fourth-year devised theatre student Deanna Gallati. “I appreciated the amount of time I was given to explore and soak in all that was happening. The set was amazing! It is definitely a show you need to see more than once; I know I want to go see it again from different perspectives.”

Garrett brought his extensive professional connections to the trip, which afforded additional opportunities to enrich the experience. The day after the performance, a talkback was organized with Nick Bruder, who played Macbeth and the Boywitch in Sleep No More, and with Tiffany Williams, who is the production’s assistant lighting director. For several hours, students spoke with Bruder and Williams about the complexities of this extraordinary show.

The following night, students attended the production of Spring Awakening by Deaf West Theater. Spring Awakening is adapted from the 19th-century German play by Frank Wedekind, which was banned after publication. Directed by Michael Arden, the primary roles are divided among deaf and hearing actors, with the deaf performers’ songs and some of their dialogue being delivered by hearing actors who double the roles. The production invites more cultural space for people with disabilities in the arts (the cast also includes an actor in a wheelchair), while also asking important questions about how interpersonal communication and physical ability are interpreted in various social contexts. (For more on Deaf West Theater’s production of Spring Awakening, see New York Magazine writer Jesse Green’s article.)

After the show, the York University students were invited to a talkback with Spring Awakening Stage Manager TJ Kearny. This was an exciting opportunity to hear about the powerful community of deaf and hearing performers. “The talkback with the stage manager after the show was a lovely bonus,” said fourth-year devised theatre student Chi-Chi Onuah. “I very much enjoyed getting to learn more about this show and how it incorporated American sign language into every aspect of production.”

Every year, the Department of Theatre forms a focused research question and theme, which acts as a cornerstone for discussion in classes and Theatre@York play selection. The production of Spring Awakening brings focus to next year’s theme of “Extraordinary Lives: Difference and Disability.”