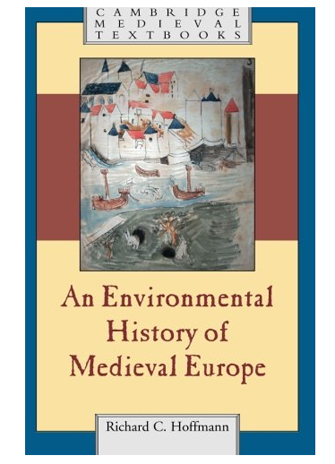 The Canadian Society of Medievalists, an academic organization devoted to supporting research excellence in all facets of medieval studies, awarded the prize in honour of his book An Environmental History of Medieval Europe (Cambridge University Press).

The Margaret Wade Labarge Prize for Medieval Studies is presented each year by the Canadian Society of Medievalists, and any book covering medieval studies that is written by a Canadian or a resident of Canada is eligible.

Hoffmann’s book examines civilization’s relationship with the natural world over a millennium. Focusing particularly on the Latin Europeans of Western Christendom between the sixth and 16th centuries, Hoffmann’s research is unique in analysis and scope, revealing the influence of natural forces on human culture.

“Traditional history has always treated nature either as non-existent or as set, and people run around in front of it and it just sits there,” says Hoffmann, a senior scholar in the Department of History. However, he says, “an environmental historian is interested in the pattern of interaction between a community and individuals and their natural world. Humans’ encounters with the natural world take place everywhere, from inside our bodies to where we plough or read. As we interact with that world, we transform it. And as it changes, it transforms us.”

In 12th century France, for example, leprosy was on the rise. This illness was already culturally significant as a Biblical disease, but it had a huge cultural impact due to the wealthy.

“If you’re a wealthy count and you’re sick and tired of endowing monasteries and convents, you endow a leprosarium,” he says. “And if your daughter really wants to show herself as a sacrificing believer, she goes and cares for the lepers.”

Hoffmann weaves an interdisciplinary narrative of interplay, where human and natural forces collide. The Western world at the time viewed itself has having the Judeo-Christian belief that it had dominion over nature.

“Culture can make certain kinds of claims, demands and programs, but the natural world also has rules,” he says. “When you enter the natural world, you follow. You can fly in your head and it’s just fine, but don’t jump out the window.”

“Unintended consequences,” he adds, is a favourite term of environmental historians in reference to when people aim to alter the natural world, but achieve unexpected and harmful results. A modern example, he says, is the use of the pesticide DDT to kill insects, but in the process harming birds and their eggs. And in medieval times, unintended consequences occurred in relation to a variety of contexts and related topics, such as the sinking of Holland below sea level as the soils of drained bogs oxidized and subsided.

The book is geared towards students of the Middle Ages and environmental history, with either historical or palaeoscientific backgrounds.