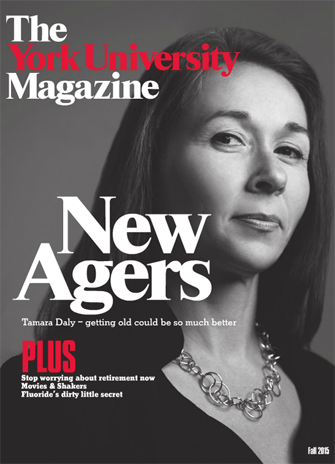 The cover of The York University Magazine’s fall 2015 issue

For 20 years, York’s magazine has been recognizing and celebrating the University’s inspiring news and research discoveries while providing insight into the people who make York University one of Canada’s most dynamic and diverse places of learning.

More than a decade has passed since the magazine received a new look, so it was time for the publication to undergo a design evolution to better reflect how the University has grown and changed.

Welcome to The York University Magazine, which features not only a refreshed appearance but also a new name. After 13 years of informing and engaging alumni, staff and faculty in the life of the University, the award-winning YorkU magazine is being retired with honours. See the redesigned publication online at digital.yorku.ca/i/592293-fall-2015.

“The magazine is a critical communication platform for the University, and given how much the University has evolved over the past several years, we believe a refreshed magazine will allow us to further strengthen connections with our readers,” said Susan Webb, chief communications and marketing officer.

As the University readies itself for the upcoming fundraising campaign, an integral part of the publication’s design refresh was the decision to rename it The York University Magazine. “YorkU magazine, while novel and appropriate for the publication in 2003, had lost its uniqueness as it became over time a regular part of on-campus lexicon, being used for a variety of  purposes,” said Jeff O’Hagan, vice-president advancement. “At 50+ years, with over 285,000 alumni, this name change signals a ‘coming of age’ and a new identity for York University and its alumni, as well as complementing the refreshed magazine design and layout.”

The effort to redesign the publication was led by a team from Communications & Public Affairs and Advancement at York University. Project leads were Rod Thornton, director of strategic communications and publisher; James Nixon, senior graphic designer; and Michael Todd, editor.

“The objective of the re-envisioning of the magazine was to evolve both the design and content to create a strong emotional connection that not only reflects the dynamic York University brand personality, but also captures the imagination, pride, engagement and support of alumni/prospective donors,” said Webb. “As part of the design strategy, the magazine team undertook a best practices review of award-winning alumni, consumer and business magazines across North America to help us arrive at a contemporary layout and design we feel is fresh, confident and visually dramatic. It was also important that the magazine was intelligent, inspiring, inclusive and welcoming, with clear links to York’s brand, fundraising campaign and academic priorities.”

The editorial content of The York University Magazine continues its tradition of excellence in keeping alumni informed and interested in York by offering readers interesting, thought-provoking stories that celebrates the academic priorities of the University. It will continue to profile York University’s people, knowledge and achievements, enhancing understanding, participation, volunteer involvement and philanthropic commitment to the University.

“We hope you enjoy The York University Magazine,” said Thornton. “I am very proud of what the team has accomplished and would welcome your thoughts, ideas and suggestions at yumag@yorku.ca.”