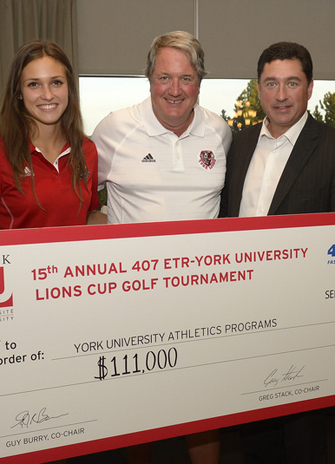 As they compete across the province and in other parts of the country, York Lions student-athletes are some of the most visible and passionate members of the York community. But as with any student, they often rely on financial assistance to ensure they can be successful both on and off the field.

More than $111,000 in financial support for York’s student-athletes was raised at the 15th annual 407 ETR-York University Lions Cup Golf Tournament, which took place Sept. 25. With this year’s contributions, the tournament has now has raised more than $5 million in student support since its inception, helping 350 outstanding students. The event was hosted at the Lionhead Golf Club in Brampton, Ont., which is owned by KaneffGolf, under the leadership of longtime York supporter Ignat Kaneff.

At the helm of the Lions Cup are co-chairs Greg Stack (BA Spec. Hons ’81) and Guy Burry (BA ’82), an honorary member of York’s Board of Governors and former chair of the York University Alumni Association Board. The tournament began in 2001 as the Chair’s Cup. Marshall Cohen, then chair of the York University Board of Governors, and his wife, Judi, envisioned creating a “friend-raiser” as well as a fundraiser, to rally the community around a great cause – student financial aid.

“It was a great day of golfing, and it means a tremendous amount to our student-athletes and to all of us at York that you came out to support this event,” said Burry. “Student-athletes are by far York University’s strongest and most passionate ambassadors. By giving back to this important cause, we can ensure that they excel, whether in or out of uniform.”

This year’s tournament welcomed a new title sponsor, 407 ETR. The company has proven to be a strong strategic partner to the University over the years through its support of graduate students, the Lassonde School of Engineering and, now, student-athletes. Kevin Sack, 407 ETR’s director of marketing, communications and government relations, was at the tournament to share a few words about why the company provides such steadfast support to York.

“Our highway, which is one of the most sophisticated toll highways in the world, has serviced nearly 118 million trips in 2015 so far, making it more important than ever that we listen to what our customer base has to say,” Sack shared. “By and large, they want to see us giving back to education and athletics in the community – and we couldn’t agree more. Supporting York University allows us to combine these priorities in order to provide students and athletes with the resources necessary to be successful and make a tangible impact in their communities.”

Mimi Demski, a second-year civil engineering student and varsity athlete on the women’s volleyball team, spoke to golfers about the enduring importance of the Lions Cup. “I’m honoured to be standing here in front of you on behalf of all the athletes at York. Most of us don’t come from the wealthiest families, we don’t have time to work part-time jobs and some can’t even get OSAP to cooperate, so to many of us, you are that wish we ask for. Your donations, these fundraisers you attend and the support you offer is incredible. You make the impossible possible.”

As the tournament came to a close and prizes for the top golfers were handed out, Jeff O’Hagan, York’s vice-president advancement, spoke about the ongoing student support that events such as the Lions Cup provide. “I want to express my immense gratitude to both Greg and Guy for their resolute commitment to the Lions Cup. Your leadership, along with the continuing support of the golfers who tee up with us each year, are the driving factors that have led this tournament to raise more than $5 million in support for York students. There is no doubt that we will continue this great success for years to come.”

Photos from the event can be found at advancement.yorku.ca/events-and-programs/the-lions-cup.

The following is the list of sponsors for the 2015 407 ETR-York University Lions Cup Golf Tournament: