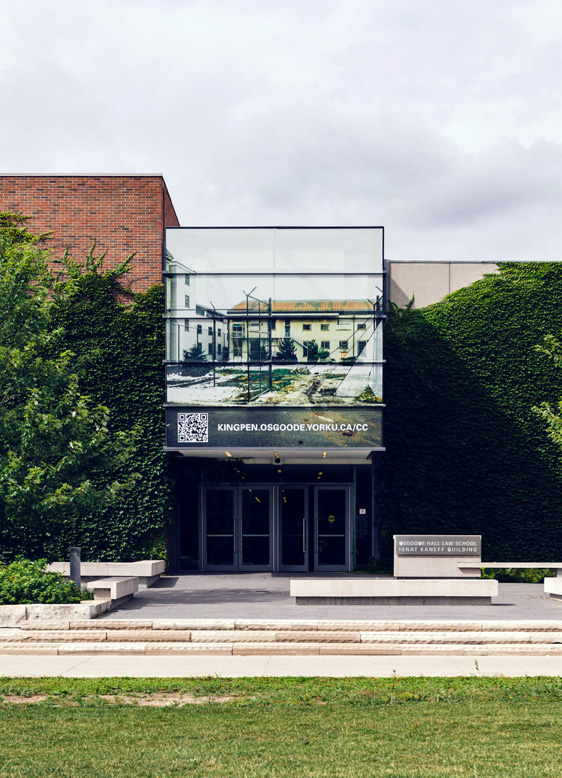 Members of the University community are invited to join Osgoode Hall Law School Dean Lorne Sossin and members of the law school community in a special celebration Wednesday, from 12:30 to 1:15pm in Gowlings Hall. Visitors will have an opportunity to view Lassonde’s 10-minute Counterbalance performance, followed by Blažević’s 600-square-foot installation of the photograph Colonialism, Continued, which has been wrapped around the exterior of the law school building’s east-facing glass structure.

Blažević’s residency resulted in the photo-based artwork Through a Prison System, Darkly: Criminal Justice Through the Lens of Kingston Penitentiary, which appears on kingpen.osgoode.yorku.ca. Her installation at Osgoode will be on exhibit until March 2016.

Lassonde’s Counterbalance project, which explores the notion of balance and risk-taking in law and life, involves a 12-foot-long seesaw made of steel and recycled wood, as well as movement, the manipulation of objects and a sound recording. Her exhibit in Gowlings Hall will be open weekdays from Sept. 8 to 20, 9am to 4pm. In addition to her performance on Sept. 16, the artist and lawyer will give another presentation on Sept. 20 at 3pm in Gowlings Hall.

Playwright Catherine Frid was also an artist-in-residence at Osgoode in the 2014-15 academic year. She gave a well-received reading of her new play NormaLeeDean, written and produced with the assistance of Osgoode students, at the Law & the Curated Body Conference last March, organized by Osgoode and York’s School of the Arts, Media, Performance & Design.