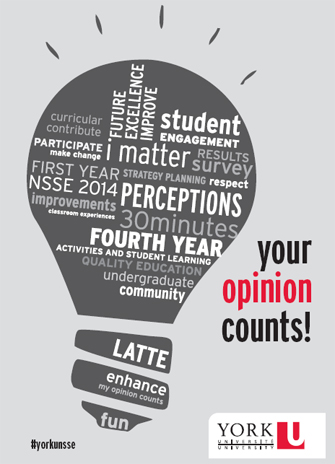 The original poster for the 2014 survey that was developed by Communications & Public Affairs.

York University has been featured in the National Survey of Student Engagement (NSSE) report called “Lessons from the Field: Using Data to Catalyze Change on Campus.”

York was the only Canadian university identified and profiled in the publication; the University’s campaign was cited as a best practice by NSSE officials.

NSSE was administered by over 700 institutions in Canada and the United States in early spring 2014. For all Ontario universities, the survey is administered on a three-year cycle. The last time was in 2011, although York also participated in 2012. NSSE surveys first- and fourth-year university undergraduate students to find how involved they are in a variety of activities that research has shown lead to good educational outcomes.

York University was benchmarked against three sets of peers: other Ontario universities, other comprehensive universities in Canada and all other participating Canadian universities. In general, York U did better than its peers in most aspects of academic challenge. This included higher scores in higher order learning, reflective and integrative learning and in learning strategies, and slightly lower scores in quantitative reasoning. York scored much better than average in “discussions with diverse others” (opportunities to interact with and learn from others with different backgrounds and life experiences).

The response rate for first-year students in the Schulich School of Business more than tripled, culminating in an unbelievable 65 per cent.

The importance of the survey was communicated to the University community and the community responded. The Office of Institutional Planning and Analysis (OIPA) subsequently provided 70 Faculty-level reports and another 100 at the department level, but kept individual responses confidential.

The York campaign had several innovations. Students who completed the survey received a virtual “thank-you” coupon on their YU-card, redeemable for a free latte at Starbucks (Keele campus) or Tim Hortons (Glendon campus), or for a $5 York Lanes gift card. Students who completed the survey were also entered in a draw for prizes. Some 1,300 gift certificates were redeemed.

To add a little bit of fun to the campaign, Faculties were challenged to compete against each other for the inaugural NSSE Champion Cup.

The first winner was the Schulich School of Business, which will display the trophy and retain bragging rights until the next survey in 2017.

For more information, download the full report at nsse.indiana.edu/pdf/LFF_3.pdf.

NSSE is conducted by the University of Indiana, but Ontario institutions add Ontario-specific questions. The survey does not assess student learning directly, but it identifies aspects of the student experience an institution does well in and where it needs to improve.

The responses have been analyzed and the results are being used to inform policy decisions at York University.