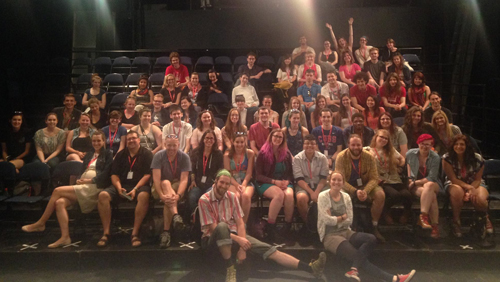 Professor James McKernan (first row, second from left) supervised over 60 student volunteers for SpaceLab. The students were from York University, the Royal School of Speech and Drama in London, UK, and DePaul University in Chicago

The Prague Quadrennial of Performance Design & Space is one of the largest international events dedicated to scenography and theatre design. The event, which took place June 18 to 28 in Prague, Czech Republic, explores staging, costume and lighting design, and new innovations in scenography. Some 5,000 delegates from more than 60 countries attended the event.

As director of education for the event, McKernan assembled the team of York U theatre students and students from other universities and colleges. The group members took on leadership roles in the SpaceLab, the educational component of the Prague Quadrennial.

Organized with goal to initiate the international experimental interaction and personal exchange between theatre and visual academies, SpaceLab offered workshops with leading international design professionals, a juried selection of student performances and a variety of events to help students connect with one another.

Under McKernan’s direction, the students worked as workshop technical coordinators to ensure that the equipment needs – from lighting to amplification for the many SpaceLab workshops, performances and presentations – were on schedule and working.

Kerwin worked with her fourth-year Set & Costume Design class on Totem, an installation involving a collaboration between York University, the University of Calgary and the Associated Designers of Canada.

The creative components for Totem were drawn from answers that students and staff provided to a questionnaire on politics and labour developed by Kerwin. The 140 answers were collected and then assembled over a film of silhouettes of students drawn and cut by the design students.

York U student Hayley Pace, who is entering her final year of studies in stage design and devised theatre, helped with Totem and was one of the main student ambassadors representing York University.

“Totem was a deeply personal and shared experience that we bonded over creating,” said Pace.

She also enjoyed being an ambassador for York. “It was amazing to talk about the theatre in my country, and for people be completely intrigued about what it is we do halfway across the world,” said Pace. “I am inspired to work at making theatre in Canada riskier, especially after the Prague Quadrennial, where I saw things from other countries that were so much more daring than anything I have seen at home.”

A slideshow of the Theatre@York production and the behind-the-scenes photographs shown at the Prague Quadrennial was put together by York theatre Professor Teresa Przybylski. The full show featured highlights from the past four years, and an excerpt is available as an AMPD Flickr gallery.

Garrett coordinated the digital exhibit for the U.S., managing all the online and electronically displayed content. He also spoke about his research and practice integrating renewable energy into stage design in a show-and-tell series that was followed by an ecoscenography meet-and-greet.

Professor Emeritus Phillip Silver moderated a panel discussion at the Prague Quadrennial titled “Contemporary Canadian Scenography,” which featured the work of a number of the set, costume, lighting, sound and media/projection designers featured in the Canadian exhibit.

“The greatest value of the Prague Quadrennial is to get our students to see work from around the world and open their eyes to design of the present, so that they can come back and work on design of the future,” Silver said.