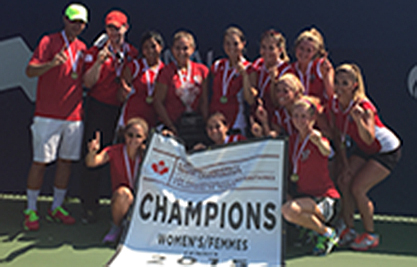 The Lions defeated the University of Alberta Pandas 4 to 1 in the final to complete an undefeated season in 2014-15.

Sunday began with the Lions claiming the first point available, thanks to a pair of doubles wins by Valerie Ushanova and Julia Kedrzycki in the top spot, and Eugenie Lim Ah Tock and Julia Khalilova in the second spot.

Ushanova picked up the team’s second point of the day when she dominated her singles match, winning convincingly in straight sets. Alberta cut the lead to 2-1 with a win in the second singles match. After that, however, it was all York as Isabella Baston won her singles match in straight sets and Lim Ah Tock came back from 4-0 down in the first set of her match en route to another victory to give the Lions the four points they needed for the championship.

Kedrzycki and Khalilova were also on court in singles in the afternoon, but their matches were stopped before completion when the Lions clinched the title.

The Lions took down the Montreal Carabins 5-2 in the semifinals on Friday at Mayfair West Tennis Club to reach the championship match. In that contest, the Lions won the doubles point and then Kedrzycki, Lim Ah Tock, Khalilova and Baston all won their singles matches for the overall victory.

In the fall, the Lions won their first Ontario University Athletics (OUA) banner in 11 years to cap off a regular season that saw them go 8 to 0 against the rest of the conference. They will begin their OUA title defence next month, beginning with a match against the UOIT Ridgebacks on Sept. 19.