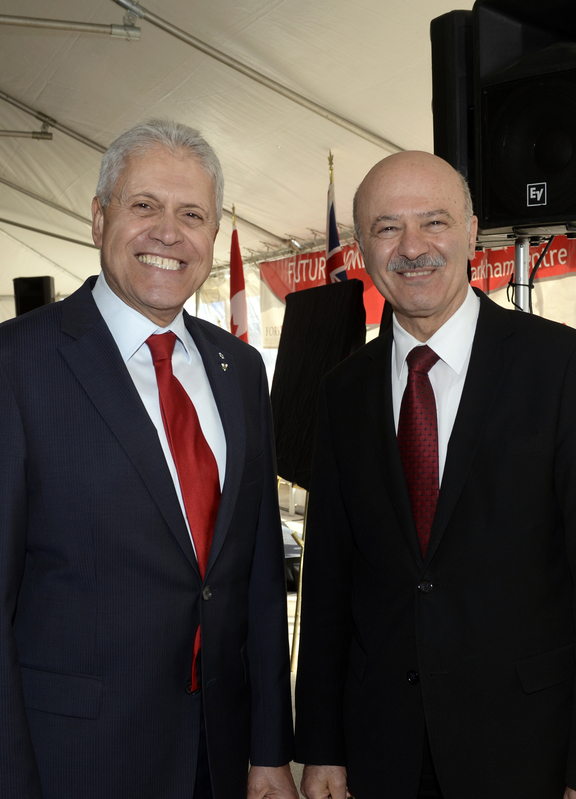 In an announcement yesterday morning, the government of Ontario gave the thumbs up to a new York University – Markham Centre campus. York U beat 26 other hopefuls to win top marks by the province for their proposal to build a new campus in the city of Markham. It was the only proposal to be selected.

“Today, I’m pleased to announce, after careful consideration, York University’s proposal for a new campus in Markham – in collaboration with Seneca College, York Region and the City of Markham – has been selected,” said Reza Moridi, Ontario minister of training, colleges and universities, to much applause and a standing ovation.

“I’m absolutely delighted that there will soon be a campus on this exact site. A campus here in York Region has always been part of the plan,” said York U President and Vice-Chancellor Mamdouh Shoukri to the capacity crowd. “We are delighted that Premier Kathleen Wynne and the Ontario government have recognized the strong merits of building a York University campus in York Region.”

More than 50,000 York University alumni, as well as some 2,000 faculty and staff, already live in York Region. York is the University of choice for close to 12 per cent of postsecondary-age youth in the region. “York University is making a real difference here in York Region,” said Shoukri. He added that the new campus will address the expected growth in the region, where Markham is the heart of Ontario’s knowledge economy.

Shoukri said the proposal for a new campus in Markham recognized the importance of innovative experiential programs to prepare students for careers and to contribute to the social and economic development of the region, Canada and the world.

The government has committed to supporting the creation of a York University campus in Markham as part of its economic plan to build Ontario up. “Over the last decades, Ontario’s postsecondary education system has experienced an unprecedented period of growth…. Demographic projections show that there will be a strong demand for postsecondary opportunities in some areas of the province after the year 2020,” said Moridi. This includes York Region. “This will be the first university campus in York Region providing, at a reasonable cost, a local option for students – in an area that is experiencing strong population growth, but that is currently underserved.”

The new York University-Markham Centre campus is expect to serve about 4,000 York Region students in the initial phase, with the potential to increase that number over time. There are 1.2 million people live in the region.

“Enhancing the postsecondary and research presence in York Region is a strategic priority for us, and we look forward to this campus becoming a reality,” said Wayne Emmerson, York Region chair and CEO. York Regional Council has committed up to $25 million toward the facility.

The City of Markham donated five acres for the new campus. “We are thrilled with the announcement … which further strengthens the opportunities for students to thrive in their local community,” said Markham Mayor Frank Scarpitti. “We believe in the young people in this community. We’re here today marking the start of York University, but it really is the start of an incredible future for our city, our region and our province.”

A wide range of degree programs, including diverse professional programs as well as joint programs with Seneca College, will be offered at the new campus.

“Seneca has enjoyed a strong relationship with York University, including a joint campus in Toronto, for more than 15 years,” said Seneca President David Agnew. “More students move between our two institutions than any other college and university in Ontario, and our academic collaboration on the new campus in Markham will allow us to provide even more joint programming and pathway options for students.”

The new campus will be built north of Highway 407, between Kennedy Rd. and Warden Ave., in the city of Markham, providing easy access to transit, major employers, research centres and the Markham Pan Am Centre. The site will be an integral part of a developing urban centre that will provide many amenities to students. It will also leverage infrastructure investments already made by government and will draw on private and public sector partnerships.

Moridi also announced that the province is planning to make another call for proposals in 2016 for postsecondary expansion, this time into Peel and Halton Regions.