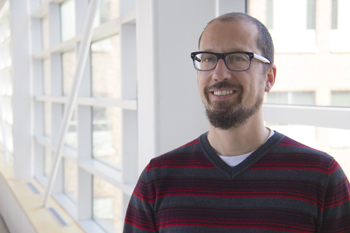 Germany’s tempestuous culture preceding the Nazi seizure of power reveals that ideas of degeneration linked to eugenics and social hygiene were widespread.

In Degeneration and Revolution: Radical Cultural Politics and the Body in Weimar Germany (2015), communication studies Professor Robert Heynen explores 1914 to 1933, the period between the start of the First World War and when Adolf Hitler became chancellor of Germany. He examines culture, from radical art to new media, and the social and political history of the left in Weimar Germany to challenge conventional thinking about that period of time.

“It’s about the relationship between ideas of degeneration – which were about notions of the body and what kinds of bodies were a threat to the nation and to the race, to the people – and radical politics … and the way in which those relationships were played out in cultural forms: in the media and in art,” said Heynen. “There was all sorts of cultural and political experimentation going on in the period that made it turbulent but really fascinating in its own right. And, of course, the end point with the Nazi seizure of power makes it really significant in terms of our understanding of history in Germany, in Europe and more broadly.”

At the time, new media included film, radio and photography. And just as avant-garde art was on the rise, so were revolutionary political and cultural movements. Eugenic and social hygienic ideas played an important role in attempts to contain or suppress those movements, in particular those of the left.

Eugenics is the attempt at shaping the human race by selecting who should reproduce, thereby limiting an individual’s reproductive rights.

“We usually associate eugenics with the far right in Germany. But at the time … it was a broadly held set of ideas that ranged from right to left and encompassed a whole lot of different political perspectives. And so eugenics really deeply infiltrated society in that period, although it was on the right that they played the most significant and dangerous role,” Heynen said.

“Certain populations, whether it was women who transgressed social norms or gay and lesbian people or disabled people, all of these were groups were seen as a threat to the social hygiene, the health of the social body. And so they were often targeted in various ways.” He notes that “it wasn’t just the nation that was seen as in need of protection, but the race. From this came a lot of what we now know as Nazi eugenics. But when those ideas spread, they had a much broader resonance.”

These ideas showed up in cultural forms that shaped how people in society were portrayed, he notes.

For example, “photography played a key role in the development of eugenics and racial science. This was especially prominent in radical right and Nazi eugenics, where books and journals were filled with photographs of heads and bodies that were intended to demonstrate racial differences and hierarchies,” he says. “This was part of a broader visual culture in which racist depictions of Jews, Africans and others were plentiful. These racial theorists argued that photography allowed for the depiction of the ‘true’ essences of different races.”

Art forms, however, were also used to resist and undermine ideas of degeneration.

“The film Different from the Others (1919) is an interesting example because it challenged dominant ideas of social hygiene, putting forward a strong argument against homophobia – perhaps the first in the world to do so. But the film became a prominent target of censors and of critics who saw it as a threat to heterosexual norms, and to national and racial hygiene more broadly,” said Heynen.

Cultural forms from Weimar Germany may still influence today’s art, such as Hollywood’s film noir and television’s “CSI” or “Law and Order” shows, he adds, but understanding Weimar Germany’s culture remains relevant because in modern times “there’s often a tendency to shift political issues onto the ideas of the body.”