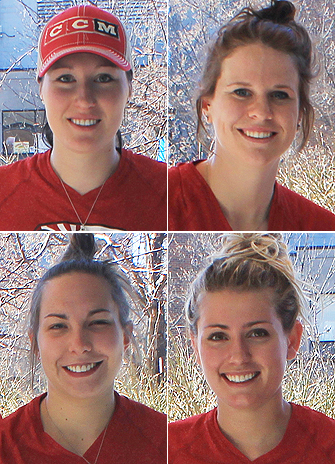 Four members of the York University Lions women’s hockey team have joined forces with members of Toronto Police Services No. 31 Division to raise money for The Hospital for Sick Children through the Cops Cycle for Kids event.

Beginning on Saturday, May 9, Stephanie Dovaston, Megan Finlay, Megan Lee and Justine Treadwell will be cycling from Toronto’s SickKids Hospital to the Philadelphia Children’s Hospital, a ride that will total 960 kilometres. The sixth annual event runs for five days and they will be riding for approximately eight hours per day.

Proceeds from the event will support the highest priority needs of the Paediatric Advanced Care Team (PACT) at The Hospital for Sick Children.

Show your support and donate!

To help fundraise for the event, the four hockey players are setting up a stationary bike outside the Tim Horton’s on Keele St. (just east of campus) on Friday, May 8 from 10am to 12pm. They will take turns riding beside the drive-thru, spreading awareness and rallying to raise money.

For more information on the ride, visit their Cops Cycle for Kids team page.