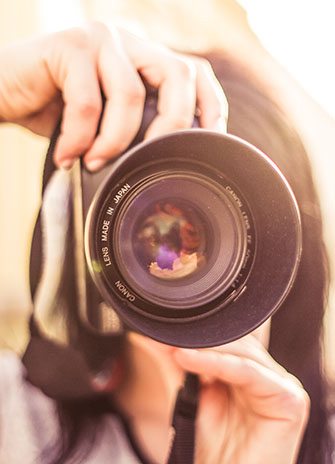 From social media selfies to aerial photography by drones, digital photography is quickly becoming a polarizing topic. The 2015 Joan & Martin Goldfarb Summer Institute in Visual Arts explores the pervasiveness and shifting landscape of screen-based images in our everyday lives, and what monuments, memorials and public art mean as material objects in urban and rural space.

“Sights + Sites: Memory, Monuments & Place After The Digital Turn” features keynote speakers Marita Sturken, professor in the Department of Media, Culture & Communication at New York University, and James Young, Distinguished University Professor of English and Judaic studies at the University of Massachusetts, Amherst. Each will deliver a free public lecture and a series of seminars as part of this year’s Goldfarb Summer Institute in Visual Arts. Sturken’s presentation is scheduled for May 6. Young will deliver his remarks on May 14. Both of these public talks are free and will take place at the Art Gallery of Ontario.

“I am delighted to welcome these distinguished scholars to York University and to explore issues about memory, monuments and place that are central to our experience in the digital age,” says Shelley Hornstein, professor of visual arts in York University’s School of the Arts, Media, Performance & Design, and the organizer of the 2015 Goldfarb Summer Institute.

“We are immersed in a world of screen-based images that intersect with our everyday material world. What is the space between the digital and the material?” asks Hornstein. “How do we bring these ideas together? During an intensive two-week period, and with the interventions from our international guests, the summer institute will take up these timely issues.”

Sturken’s public lecture is titled “Kodak, Polaroid and Facebook: The Shaping of Memory, Family Pictures, and the Photography of the Self.” She will deliver her lecture on Wednesday, May 6, at 6pm at the Art Gallery of Ontario’s Jackman Hall, 317 Dundas St. West, Toronto. In her remarks, Sturken will explore the history of photographic memory, how the practices of domestic photography were sold to consumers, and how social media is changing concepts of the family photograph, the photographic album and the self-portrait.

Sturken will also give three seminar presentations for the institute. “The Politics of Visuality and the Erasure of the Iraq War” examines the visual economy of the Iraq War and its cultural memory. This seminar places a particular emphasis on the politics of visuality through which the war has been effectively erased from public discourse. In her seminar titled “Memory and 9/11,” the politics of objects and display will be explored through the 9/11 memorial, museum and gift shop. Her final talk, “Thinking about Architecture,” looks at the architecture of memorialization, security/defence, renewal and war/violence in a post 9/11 world.

A former editor of American Quarterly, the journal of the American Studies Association, Sturken teaches courses on cultural studies, visual culture, popular culture, advertising and global culture. Her most recent book is Tourists of History: Memory, Consumerism, and Kitsch in American Culture (2007).

The second public lecture, by Young, is titled “The Arc of Memorial Vernacular: Between Berlin and New York.” Young’s presentation will examine the evolution of monument building and design. He will offer an overview of Edwin Lutyens’ Battle of the Somme Memorial, Henri Pingusson’s Memorial to the Deportees in Paris and Maya Lin’s Vietnam Veterans’ Monument in Washington. Young will explore how these forms lead to and underpin contemporary memorials, counter-monuments and their processes, such as Berlin’s Memorial to the Murdered Jews of Europe and the National September 11 Memorial at Ground Zero in New York City.

“The Arc of Memorial Vernacular: Between Berlin and New York” takes place May 14 at 6pm at the Art Gallery of Ontario’s Jackman Hall.

A Guggenheim Fellowship recipient and director of the University of Massachusetts’ Institute for Holocaust, Genocide & Memory Studies, Young has written widely on public art, memorials and national memory. His articles, reviews and opinion essays have appeared in the New York Times, the Los Angeles Times and the Chicago Tribune, among others. He is the author of Writing and Rewriting the Holocaust (1988), The Texture of Memory (1993), which won the National Jewish Book Award in 1994, and At Memory’s Edge: After-images of the Holocaust in Contemporary Art and Architecture (2000).

Now in its seventh year, the Goldfarb Summer Institute of Visual Arts offers York University graduate students and the wider community the opportunity to engage with prominent international theorists, artists, curators and critics through seminars, workshops and public lectures.

Other visiting scholars who have presented in previous Goldfarb Summer Institutes include: Melissa Shiff and Louis Kaplan of Mapping Ararat, a project within of York University’s Sensorium Centre for Digital Arts & Technology, a research centre based in York University’s School of the Arts, Media, Performance & Design; Paula Amad and Nick Yablon, professors of Cinematic Arts and American Studies, respectively, at the University of Iowa; York Professor Emerita Carol Zemel of the Department of Visual Art & Art History at York University; and Maia-Mari Sutnik, adjunct professor in Ryerson University’s School of Image Arts and associate curator of photography at the Art Gallery of Ontario.