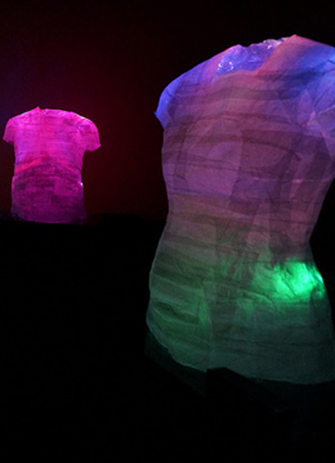 From a “smart” umbrella that glows brighter in heavy rain to a video game designed to teach the user about interpersonal relationships, the York University student works showcased in this year’s Digital Media Exhibition demonstrate how technology is changing the way we interact with information and our physical environment.

Students in York University’s Digital Media program, offered jointly through the School of the Arts, Media, Performance & Design and the Lassonde School of Engineering, use code and programming as tools for creative expression. The objects and experiences they create span a wide variety of concepts and formats, including mobile devices, large-scale installations, screen-based projects using single or networked computers, data visualization, interactive performance and more.

Course directors have selected some of the remarkable projects created in their classes during the academic year for a show taking place April 16 to 21 at Artscape Wychwood Barns in midtown Toronto. The digital media makers will be on hand to welcome the public at a reception on Friday, April 17, from 6 to 9pm, and throughout the run of the exhibition.

Here’s a taste of what awaits the curious visitor:

Koeun Lee and Sarah Phul’s LED Umbrella is equipped with pressure and water sensors to measure the intensity of rain. The students programmed an Arduino microchip to convert the data into distinct patterns and colours for the LED lights that run along the umbrella’s ribs. In addition to injecting fun and cheer into a rainy day, a bright umbrella would enhance pedestrian safety by boosting visibility in traffic. The changing colours and patterns also provide an ongoing environmental scan, giving users an objective comparison point for how hard it’s raining and whether the weather is getting better or worse as they walk along.

Have you ever wanted to buy clothing online but were reluctant to order something without first trying it on? Online shopping seems like a natural fit for Xiaolan Xu’s Virtual Dressing Room. Using Microsoft Xbox’s motion sensing input device, Kinect, the user’s hand motion chooses clothing from a list on the screen. The selected virtual outfit is then superimposed on the user’s body in an on-screen virtual mirror. It’s a prototype for fearless online shopping in the future.

YOUniversity, on the other hand, transports you into a virtual-reality educational space. Rohan Likhite, Stedman Tam and Jeff Tuxworth have created a 3D space based on the Accolade West Building and the Joan & Martin Goldfarb Centre for Fine Arts on York University’s Keele campus. The space can be experienced by wearing an Oculus Rift head-mounted display.

Philosophy may not be top of mind in the gaming industry, but it is for digital media students David Benoit, Raymond Wan and Raechel Kula. Their game Encounters builds an interactive digital world that illustrates Martin Buber’s philosophy of interpersonal relationships.  Grounded in his interest in Hasidic Jewish mysticism and the mythology of Shekinah as fragments of the divine trapped within the physical world, Buber’s writings centre on the valuation of the “between” that is created as people interact with objects and other beings. Encounters gives the user ever-increasing opportunities for interaction, demonstrating the Shekinah tenet that the more relationships are formed and experienced, the larger the user’s dome of potential experience becomes.

Most of us keep some aspect of ourselves hidden due to fear of social stigma. Denise (Nichie) Enriquez, Dallis King, Anna Papazian and Samantha Puder’s SECRET BODY is an interactive art installation that explores themes of stigma and social interaction. The piece attempts to measure human emotion through affective science methods and display it through data visualization. Using bioinformatic data, SECRET BODY creates a light pattern within 10 human-shaped models, and then uses the same data to create an interactive platform between the work and the audience.

For an online introduction to the more than two dozen projects featured in the exhibition, visit the AMPD Digital Media website. Then go to the show to experience them live.