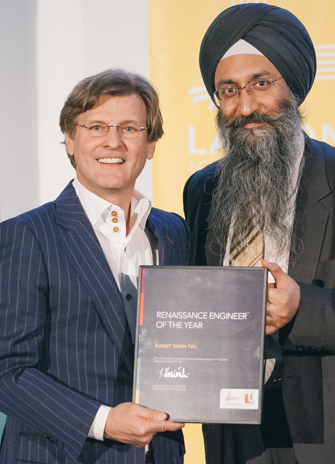 The Lassonde School of Engineering recently hosted the inaugural Lassonde Awards – or the “Loscars,” as they are known.

In March, members of the Lassonde School of Engineering community gathered at the Glendon campus for an evening devoted to celebrating and recognizing the outstanding accomplishments of the school’s faculty, staff, students and supporters.

“This was a wonderful opportunity to celebrate our people: our students, our faculty members and our team of staff. And, of course, our friends and supporters who have made so many of our aspirations possible,” said Janusz Kozinski, founding dean of the Lassonde School of Engineering.

“We talk a lot about our incredible new building, our record-breaking enrolment numbers and all the great things we are doing to change the student experience. All those things are important, by the way, but what really matters is our people,” he added.

The MCs for the ceremony were Lassonde engineering students Manjeet Kaur and Khady Lo Seck, who shared stories of life at the school and introduced the guest presenters throughout the evening.

Richard Hornsey, Lassonde’s vice-dean, opened the night by presenting awards for Lassonde’s faculty and staff in a number of categories, acknowledging creativity, teaching and community spirit. Hornsey presented the awards to: Technical Services lead Rob Reynolds, who won the Citizenship Award; Electrical Engineering and Computer Science Director of Computing Ulya Yigit, who picked up the Creativity & Innovation Award; Suprakash Datta, professor of electrical engineering and computer science, was honoured with the Outstanding Service Award; and the Educator of the Year Award went to Electrical Engineering and Computer Science Professor Burton Ma.

Hornsey also acknowledged the achievements of graduate researchers Julien Li-Chee-Ming and Catherine Tsouvaltsidis, who both received Canada-wide acknowledgement in the past 12 months. Li-Chee-Ming won Best Student Paper at the Unmanned Systems Canada Conference, while Tsouvaltsidis was named among the 50 female top engineers by Women in Aerospace Canada.

Many Lassonde students received scholarships throughout the academic year, and the winners accepted their awards at this event from the donors who established the awards. Leading the presentations was Pierre Lassonde, founding donor of the school, who was on hand to pay tribute to the recipients of his flagship Lassonde Scholarship, worth $80,000 over four years.

Other presenters included Marisa Sterling from Professional Engineers Ontario and Maureen Mountjoy from Association of Ontario Land Surveyors, who recognized a series of scholarship winners supported by their organizations. York linguistics Professor Sheila Embleton, who is the former vice-president academic and vice-provost of York University, announced the recipient of the Embleton Award. The full list of winners is available here.

The Bergeron Medal of Distinction for the most promising entrepreneurs at Lassonde was presented by former winner Ragavan Thurairatnam (BASc ’13) to computer engineering students Will Lau, Manjeet Kaur and Khady Lo Seck, who were recently selected to be part of the exclusive Next36 entrepreneurship program.

Kozinski presented special Dean’s Awards to the supporters and friends of the school whose efforts on behalf of Lassonde allowed many of the achievements of the past year to take place. Laing O’Rouke project leader Mark Platt, who is responsible for constructing the new Bergeron Centre for Engineering Excellence on campus, was named Honorary Lassondian of the Year. Alumnus of the Year went to Lassonde and Schulich graduate Abdullah Merei (BASc ’09, MBA ’14). The Contribution to Women in Leadership Award was presented to Marcia Mayhew, who recently created a new mentoring program for Lassonde’s female students. The Innovation Partner of the Year was awarded to Quanser, which has endowed the NSERC-Quanser Chair in Engineering Design for Innovation at Lassonde. Recognized as Corporate Partner of the Year was 407 ETR, for its establishment of the 407 ETR Learning Laboratory to test emerging classroom technology and new learning methodologies. The laboratory is located in the Lassonde Building.

University Professor Emeritus of Engineering Eshrat Arjomandi received a special Lifetime Achievement Award in honour of her remarkable contributions to academia and her tireless efforts to bring more women into engineering.

The final award of the evening was given by Kozinski to the individual who embodies the values and the spirit of the Renaissance Engineer. The deserving winner was Suneet Singh Tuli, CEO of Datawind and the mastermind behind the world’s cheapest tablet computer. Tuli received the award for his personal commitment to making technology accessible to what he calls the “forgotten billion” in India and the developing world. He is also the father of a Lassondian, his son recently having enrolled at Lassonde in the Engineering and International Development program.