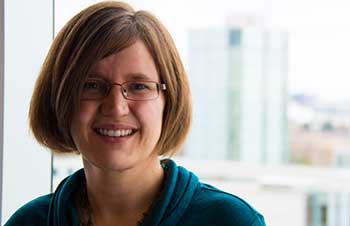 Political Science Professor Heather MacRae in the Faculty of Liberal Arts & Professional Studies has been awarded a Jean Monnet Chair in European Integration, a teaching post sponsored by the European Union (EU) that celebrates excellence in research and teaching on the EU throughout the world. MacRae, who is also the co-director of the Canadian Centre for German and European Studies at York, will use the funding from the award to increase the European Studies curriculum offered to York University undergraduate and graduate students.

Over the award’s three-year tenure (2014-17), MacRae will enhance the courses she teaches at York through special lectures, seminars, tutorials and guest speakers. She will also add technology-based learning to her courses – which include Governing the New Europe and Politics and Policies of European Integration. In addition, MacRae will organize outreach activities to connect the university with a variety of stakeholders in Canada and internationally.

“The Jean Monnet Chair provides York with an unprecedented opportunity to increase our capacity to research and teach European Studies,” says MacRae. “Canada and the EU have strong social, economic, cultural and political ties, and this award helps York be at the forefront of issues that have a significant impact on Canadian and European societies.”

MacRae teaches European politics to third- and fourth-year undergraduate students as well as graduate students. Her main area of expertise is gender policy in the EU, and she currently researches the unintentional re-construction of gender differences through European policy initiatives. MacRae has published on various aspects of gender policy and gender relations in the European Union member states.

MacRae is the second York professor to be awarded a Jean Monnet Chair, making York one of only 11 Canadian universities whose faculty has been recognized with the award. Glendon College professor Willem Maas received the Jean Monnet Chair in 2008.

The prestigious Jean Monnet Chair was launched in 1989 to honour French diplomat Jean Monnet (1888-1979) – one of the principal architects of European integration. Monnet was the secretary general of the League of Nations in 1919; he famously proclaimed that the only hope for peace after the Second World War was through Europe’s joining as a collaborative community. The Jean Monnet Chair stimulates teaching, research and reflection on issues related to EU integration.