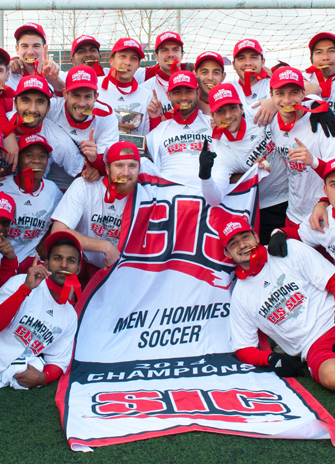 Third-year striker Joey Cicchillo scored the game’s only goal in the 32nd minute as the York Lions captured the fourth Sam Davidson Memorial Trophy in program history thanks to a 1-0 victory over the McMaster University Marauders in the final of the Canadian Interuniversity Sport (CIS) men’s soccer championship at the University of Prince Edward Island (UPEI) turf on Sunday afternoon.

The Lions, who had previously been crowned in 1977, 2008 and 2010, won their three duels by identical 1-0 scores at this week’s CIS tournament, including a thrilling extra time victory against Montreal in Thursday’s opening round and a shutout of host UPEI in Friday’s second semifinal.

The new champions complete an undefeated campaign after going 14-0-2 in conference play and 6-0 in post-season action and on a remarkable streak of seven straight whitewashes, their last goal allowed dating back to their penultimate league contest against the University of Windsor Lancers on Oct. 18.

For their part, the Marauders, still looking for their first Davidson Trophy triumph, settled for silver for the third time, matching their second-place finishes from 1991 and 1992.

York head coach Carmine Isacco, whose team outscored its opponents by a 68-7 overall margin this fall, paid tribute to his players and their achievement.

“It was a tough game but we showed great character,” said Isacco, who is also the CIS coach of the year. “We were possibly unlucky not to win by more. Our goal at the start of the year was just to play every ball properly, and I think our record, with 20 wins, shows we achieved that. It was a relief to win today, and credit McMaster for pushing us hard once again.”

On the losing side, Marauders coach Dino Perri recognized that his team had fallen short, but praised the Lions.

“No complaints at all. We didn’t really play well today but we were up against an excellent team. I am very proud of our team and a silver medal today is an accomplishment that we should be very proud of. It has been a very good season.”

Although they won all their games by a 1-0, the Lions domination was clear for all to see. Their touch, poise and ability to move the ball was a class above any other team, while defensively they were outstanding. In all three games, the Lions restricted opponents mostly to half chances, and in the final, goalkeeper Colm Vance did not have a notable save to make.

Cicchillo’s strike came in the 32nd minute of what was a tight first half. Jarek Whiteman was able to knock the ball down with his head and Cicchillo was able to pivot and place his shot just inside the left-hand post of the Marauders net minder Angelo Cavalluzzo.

“I thought Angelo had got there,” admitted Cicchillo, who was named to the tournament all-star team. “I didn’t quite catch it cleanly but it was well placed and it was an unbelievable feeling to see it go in. It is the best feeling in the world to win this medal and prove we are the best team in the country.”

The Lions’ control of the game was masterful, with Mike Stinson and Jonathan Lao running the midfield, fullbacks D’Mello and Walker closing down anything played out wide, and centre backs Moody and Fabrizi making sure that all Marauders attacks didn’t reach Vance in the Lions goal. When called upon to deal with crosses and balls played into the area, the net minder was equal to the task.

The Marauders played as hard as they could, with the excellent Garnett always probing from midfield, but every attack was repelled by the Lions backline.

Lao should have doubled the lead in the dying minutes when Downes was fouled in the area, but he placed his penalty kick wide of Cavalluzzo’s right hand post. To add to the frustration of McMaster, Vecchi was dismissed with seconds remaining for a second yellow card, and despite some late flurries of pressure, it was all too little, too late.

Stinson, a native of Toronto, was named game MVP for the winners, while teammate Henry Moody of Toronto was voted championship MVP after a dominant performance at the heart of the Lions defence.

York will get a chance to defend the national title on home turf 12 months from now as the Lions will host the 2015 CIS tournament in Toronto.