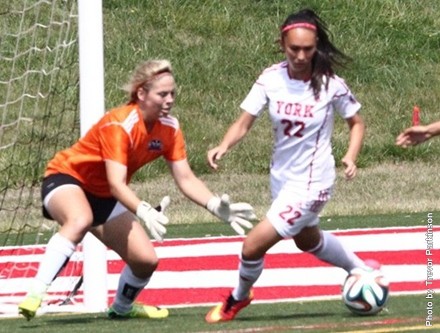 The win was the second in back-to-back games for the Lions over the Thunderbirds, as the visitors outscored their opponents by a combined 28-0 in two contests. The victory also equalled the total number of wins they had in 16 games last year, and they remain one of only two squads in the Ontario University Athletics (OUA) West with an undefeated mark after two weeks of the season.

It took 30 minutes for the Lions to get on the board, with Alessia Mattucci opening the scoring. Nour Ghoneim added her eighth of the year just before halftime to give the squad a 2-0 lead at the break. More details on York Lions website.

One day earlier, the team rolled to a 16-0 win over the Thunderbirds in the first meeting between the two teams. Eight different players registered a goal in the contest led by Ghoneim, who found the back of the net five times on seven shots. Also posting a multi-goal game was striker Stephanie Caruso with a hat trick, and she also added two assists. More details.

The York University Lions men’s soccer team posted its second straight lopsided victory over the Algoma University Thunderbirds on Sunday, winning by a score of 9-0 at Superior Heights Field.

Jarek Whiteman opened the scoring in the 16th minute and added his second of the contest in the 45th minute to lead the Lions. He also assisted on the game’s second goal, which came off the foot of Jonathan Lao. More details.

One day earlier, the Lions posted an 11-1 victory over the Thunderbirds. Seven different players scored in the victory, with Ernesto Gaita, Dena Iezady, Matt Stinson and Eric Amato each netting a pair of goals. More details.

Football Lions fall to No. 3 Mustangs in home opener

The York University Lions football team was handed a 61-0 loss to the No. 3 nationally ranked Western University Mustangs in its home opener at York Stadium on Saturday afternoon.

The defending Yates Cup champions were simply too much for the young Lions. The Mustangs jumped out to a 17-0 lead after one quarter and did not look back. They added another 24 points in the second before slowing in the final two frames.

York’s best chance to get on the scoreboard came at the end of the first quarter, when a long drive ate up nearly six minutes of time and brought the Lions down to the one-yard line. But their goal-line attempt came up short and they turned over the ball on downs. More details.