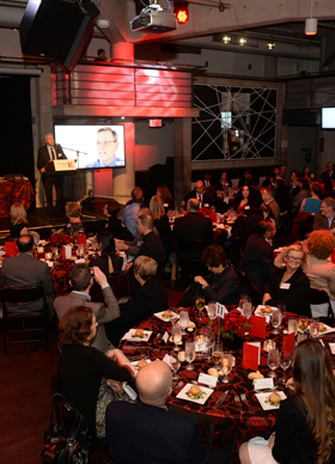 Each of York’s more than 7,000 administrative staff bring a special something to their role and every year, the University takes a night to celebrate, honour and share some laughs as part of the President’s Staff Recognition Awards gathering.

Six recipients and more than 40 nominees were recognized at the 2013 President’s Staff Recognition Awards on April 30. The event took place at The Underground Restaurant in the Student Centre at York’s Keele campus and was attended by 145 guests, including recipients, nominees and their family and friends. It was emceed by President & Vice-Chancellor Mamdouh Shoukri and featured remarks by President Emeritus H. Ian Macdonald.

“I know I repeat this every year, but these awards are by far one of my favourite events,” said a delighted Shoukri. “York’s reputation as a leading, research-intensive university is thanks in large part to the outstanding efforts of our dedicated staff, and tonight’s event allows us to celebrate those who go above and beyond. I’m so pleased to be able to recognize those leaders, whether recipient or nominee, who are the heart and soul of the University and who offer their unending support to our students, faculty, staff, friends and grads.”

The recipients of the 2013 President’s Staff Recognition Awards are listed below. Click on the names to view video testimonials:

Guests enjoyed dinner and drinks as videos showing heartfelt messages of support and admiration for each recipient were played onscreen. The recipients then took to the podium to share a few words after Shoukri presented them with their respective awards.

Panaro, the recipient of the 2013 Ronald Kent Medal, shared her esteem for her fellow nominees. “Choosing a winner for these awards had to have been a very difficult task,” she said. “The nominees here tonight demonstrate the kind of support, passion and dedication that deserves to be recognized, and I am so grateful to be celebrating tonight with York staff who go to exceptional lengths to make a difference throughout our extended community.”

Another of the night’s award recipients, DiMarcantonio, said he could not have achieved this on his own. “This honour isn’t just for me—it’s more so a testament to the hard work and dedication of the colleagues I work with each and every day. I’m only one spoke and you need 40 spokes to make a tire!”

Shoukri concluded the evening by congratulating this year’s recipients and nominees and thanking everyone who made the event possible, including Vice-President Finance and Administration Gary Brewer, the Office of the President, Learning Technology Services and Community & Alumni Relations. Shoukri also praised one of York’s most important affinity partners, TD Meloche Monnex, for their contributions to the reception.

Neitzschmann summed up the evening as she took the stage to accept the 2013 Phyllis Clark Campus Service Award. “Tonight is a character assembly where we can recognize not only the good work that we all do together, but the good people who work here,” she said. “There’s no greater or worthier cause than serving others and, after spending this night with all of you, I’ve never been prouder to be a York employee.”