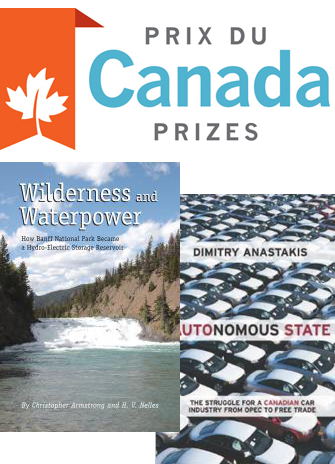 Two books authored by individuals with connections to York University are among a group of scholarly works by Canadian academics that are in the running for a prestigious Canada Prize.

The winners of the annual awards will be announced prior to the Canada Prizes ceremony on May 7, from 4:30 to 5:30pm, at the Centre of Excellence for French-language and Bilingual Postsecondary Education at York University’s Glendon campus. The ceremony will be followed by a reception. The selection of Glendon as the site for the ceremony is the result of a new partnership with the Federation for the Humanities & Social Sciences and York University. Members of the York University community are invited to attend the Canada Prizes ceremony, RSVP online (Event Code: 882) by May 5.

“Glendon was identified as an ideal location to host this national event in light of its bilingual mandate and its unique focus on education in the humanities and social sciences. We are really excited to be working with the federation to celebrate the excellence of Canadian scholarship in these disciplines,” said Lisa Philipps, AVP research and a member of the federation’s board.

The Canada Prizes are adjudicated by a group of leading academics and public intellectuals, as exemplified by this year’s distinguished jury panel, which includes previous winners of the award.  Michael Adams, CEO of Environics and a juror for this year’s Canada Prize in the Social Sciences, will give keynote remarks at the event.

Wilderness and Waterpower: How Banff National Park Became a Hydroelectric Storage Reservoir explores how the need for electricity at the turn of the century affected and shaped Banff National Park. It tells the story of Alberta’s early need for electricity, entrepreneurial greed, debates over Aboriginal ownership of the river, moving park boundaries to accommodate hydro-electric initiatives, the importance of water for tourism, rural electrification, and the ultimate diversion to coal-produced electricity. It is also a lively national story, involving the irrepressible and impetuous Max Aitkin (later Lord Beaverbook), R.B. Bennett (local legal advisor and later prime minister), and a series of local politicians and bureaucrats whose contributions confuse and conflate issues along the way. (Source: University of Calgary Press)

Autonomous State: The Struggle for a Canadian Car Industry from OPEC to Free Trade provides the first detailed examination of the Canadian auto industry, the country’s most important economic sector, in the post-war period. In his book, Anastakis, who is professor of history at Trent University in Peterborough, Ont., chronicles the industry’s evolution from the 1973 OPEC embargo to the 1989 Canada–US Free Trade Agreement and looks at its effects on public policy, diplomacy, business enterprise, workers, consumers, and firms. Using an immense array of archival sources, and interviews with some of the key actors in the events, Anastakis examines important topics in recent auto industry and Canadian business and economic history.

Awarded annually by the Federation, the Canada Prizes celebrate the best Canadian scholarly books—not simply within a single academic discipline, but across all the disciplines of the humanities and social sciences. The prizes are awarded to books that make an exceptional contribution to scholarship, are engagingly written, and enrich the social, cultural and intellectual life of Canada.

To learn more about the other books short listed for the prizes, visit the Canada Prizes website.