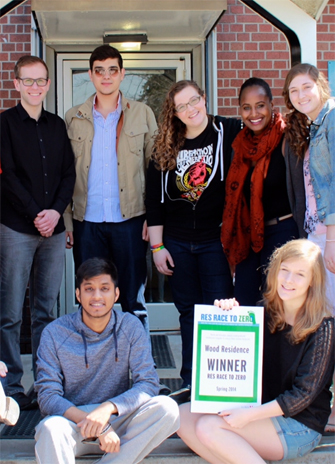 Throughout March, undergraduate students on York’s Keele and Glendon campuses strived to reduce their energy footprint as part of York University’s annual Res Race to Zero.

Students in Glendon’s Wood Residence proved they knew how to cut their energy consumption and are the winners of the 2014 Res Race to Zero competition. Wood Residence students reduced their consumption by 3.466 per cent over the month of March.

The race pitted York undergraduate residences against each other in a friendly bid to see which building could reduce its carbon footprint the most, from March 1 to 31. Each undergraduate building has a Residence Environmental Ambassador (REA), who works with students to build awareness, share best practices, and otherwise help students to be responsible with lights, computers and small electric appliances.

There were nine undergraduate residences competing in the 2014 Res Race to Zero, seven on Keele campus and two on Glendon campus. As buildings differ in age and therefore energy efficiency, the competition is measured by comparing this year’s energy consumption to residents who occupied the same building in the year the energy meters were installed in each residence. The residence with the highest per capita energy savings over the baseline year wins the competition.

The Res Race to Zero takes place each year during the month of March.