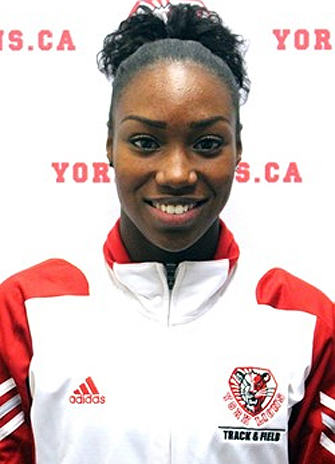 A second-year sprinter from Brampton, Ont., Bingham was named the OUA athlete of the year in track events and went on to pick up female-MVP honours at the CIS championships. The humanities student claimed three gold medals at the national meet, including a new record of 7.26 seconds in the marquee event, the 60-metre sprint.

A national-level gymnast before she took up track and field, Bingham now hopes to add another honour to her impressive resume as she could become the first York athlete to hoist a BLG Award. The University’s only previous nominees were basketball player Karen Jackson (1997) and soccer player Francesco Bruno (2009).

Last summer, a few weeks after representing Canada at the World University Games, Bingham ran the anchor leg of the 4×100 relay team that broke the senior national record at the IAAF world championships in Russia (42.99). The sprinter had already caught the attention of international connoisseurs at the 2012 IAAF World Juniors in Spain, where she missed the podium by .01 seconds in the 100m, and at the 2011 World Youth Championships in France, where she was part of a bronze medal-winning relay.

“Khamica is an extremely talented student-athlete whose ability on the track speaks for itself. She has already re-written the CIS record book in just two years and I believe there is still plenty more to come,” says York head coach Colin Inglis. “She has the ability to be one of the top female sprinters Canada has ever produced, and it is great to see her competing in CIS to help her develop as a runner.”

On Monday, April 28, the eight national nominees will be honoured at the EPCOR Centre’s Jack Singer Concert Hall in Calgary. One female and one male winner will receive a $10,000 postgraduate scholarship, while all finalists will return home with a commemorative gold ring.

The BLG Awards were established in 1993 to recognize the top female and male athletes from universities affiliated with CIS. For more information, visit the official BLG Awards website.

“We are extremely excited to be hosting the 22nd BLG Awards in Calgary,” said Doug Mitchell, national co-chair of BLG. “We continue to be amazed by the talents and accomplishments of these outstanding athletes. Each year, as we follow the past winners and hear about their accomplishments or what they are involved in, we realize how important their university sports background has been to them. We congratulate the universities who have provided the great education and athletic programs for these students to succeed in their careers.”

“A key part of our mission is to help develop Canada’s next generation of leaders, and these exceptional student-athletes are prime examples of the greatness that can be found at our Canadian universities,” said Pierre Lafontaine, chief executive officer of CIS. “To be nominated for a BLG Award is one of the most prestigious honours our 11,000 student-athletes can aspire to in their university careers. This is a very special honour not only for the eight finalists but also for their coaches, teammates, families and anyone who contributed to their success.”

In addition to Bingham, the 2014 nominees for the Jim Thompson Trophy presented to the female BLG Award recipient are hockey player Katia Clément-Heydra from McGill University, volleyball player Lisa Barclay from the University of British Columbia, as well as basketball player Justine Colley from Saint Mary’s University, who was also nominated a year ago.

Colley, a fifth-year guard from East Preston, N.S., was named CIS player of the year in women’s basketball for the second straight season after she led the Atlantic conference in scoring for the fourth campaign in a row. The commerce student guided the Huskies to a perfect 20-0 regular season, a second consecutive AUS title and a program-best silver medal at the CIS championship.

Clément-Heydra, a fourth-year centre from St. Bruno de Montarville, Que., was voted CIS MVP in women’s hockey thanks to her 40 points (13-27-40) in only 20 league games, good for first in Quebec and second in the nation. The industrial relations major added 15 points in eight post-season contests as she helped the Martlets capture their first CIS banner since 2011.

Barclay, a fourth-year outside hitter from Brandon, Man., was named CIS MVP in women’s volleyball after she led the country in kills (4.26) and points (4.99) per set. After guiding UBC to the CIS title in each of her first three campaigns with the team, the kinesiology student once again helped the Thunderbirds reach the national final, where they settled for silver.

Heelis, a third-year forward from Georgetown, Ont., earned CIS MVP honours in men’s hockey after he won the AUS scoring crown with 42 points, including a CIS-leading 24 goals in only 26 league games. The science student then guided the Axemen to their first Atlantic conference title since 2006 and their first University Cup championship appearance in eight years.

Heather, a fifth-year quarterback from Oromocto, N.B., merited the Hec Crighton Trophy as the top player in the country after he shattered one of the most prestigious single-season records in CIS football thanks to an astounding 3,132 passing yards in eight regular season games. The history student also set an RSEQ season mark with 20 touchdown passes and completed a team-record 199 passes while leading the Gaiters to their first six-win campaign (6-2) since 1993.

Scrubb, a fourth-year guard from Richmond, B.C., became the first player in history to be named CIS MVP for the third time in men’s basketball. The commerce student, who led Carleton in points (18.6) and assists (4.9) per game during league play, guided the Ravens to an unblemished 22-0 regular campaign and to their fourth CIS title in as many years with the team.

Hulak, a fourth-year forward from Saskatoon, was named Canada West MVP and won the conference scoring race by 12 points over a 28-game schedule thanks to his 48 points (13-25-48), which ranked second in the country. The business student guided the Huskies to a second-place finish at the University Cup and, despite a heartbreaking loss to Alberta in the final, earned MVP honours after leading the three-game tournament in goals (4) and points (6).

The BLG Awards are based on athletic accomplishments, outstanding sportsmanship and leadership. Each of the 54 CIS schools selects one female and one male athlete of the year. From these nominees, one female and one male athlete are chosen within each of the four regional associations: Atlantic University Sport (AUS), Réseau du sport étudiant du Québec (RSEQ), Ontario University Athletics (OUA) and Canada West Universities Athletic Association (CWUAA). To be eligible, a student-athlete must have competed in a CIS sport for a minimum of two years and cannot be a previous recipient of a BLG Award.

All nominees receive a commemorative gold ring and winners are presented with a trophy and a $10,000 scholarship to attend a Canadian university graduate school. Winners are selected by the Canadian Athletic Foundation, a not-for-profit board established for the purpose of administering the BLG Awards and protecting the integrity of the selection process. The CAF Board of Trustees consists of 20 members from five Canadian cities representing major corporations from across the country who are committed to ensuring that Canadian university athletes receive the recognition they deserve.